In this study, we characterize the anodic dissolution behavior of thin PVD Cu/CVD Co bilayer films using linear sweep amperometry. The thin blanket seed layers are intended to mimic the sparse Cu seed coverage that might be present over a Co liner in a narrow dual damascene geometry. An example of this type of analysis is shown in Figure 1. The top figure (1a) shows the anodic polarization behavior of two separate electrode samples (plotted together), one for thick Co, another for thick Cu. The expected potential difference in the stripping peaks is observed, with Co dissolving at less anodic potentials. The middle (1b) and bottom (1c) figures show the behavior of bilayer electrodes having Cu overlayers of varying thickness. The Cu thickness clearly affects the polarization behavior of the underlying Co, with a fairly thick overlayer required to completely suppress early Co dissolution. The impact of these effects and other Cu chemistry aspects on the interconnect yield and reliability will be discussed.

This work was performed by the Research Alliance Teams at various IBM Research and Development facilities. 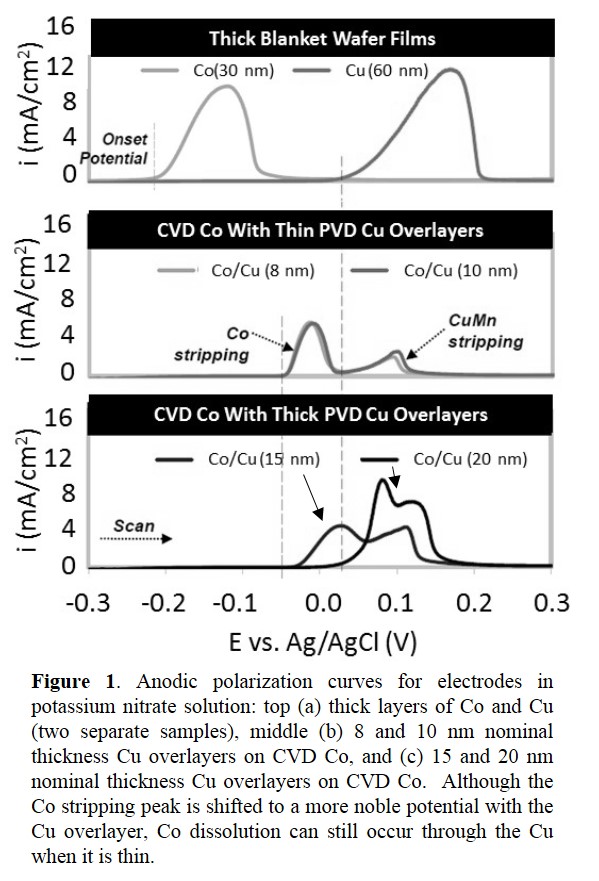