Chesapeake A (Gaylord National Resort and Convention Center)
X. Gao, A. Huang (Sandia National Laboratories), and B. Kerr (New Mexico Institute of Mining and Technology)
It is well-known that band-to-trap tunneling processes in semiconductor devices cause a significant increase in terminal currents under high electric fields [1-3]. Standard band-to-trap tunneling models such as those by Schenk [1-2] and Hurkx [3] are widely incorporated in TCAD device simulation tools [4]. However, these models were developed for silicon devices, so they did not include the effect of band offsets in heterojunction devices, though they are routinely used in simulating the latter. As shown recently by Myers [5], the band offsets at the emitter-base (E-B) junction in heterojunction bipolar transistors (HBTs) can greatly enhance the band-to-trap tunneling near the E-B junction and consequently exacerbate the degradation of gain due to radiation damage. In this paper, we propose an improved band-to-trap tunneling model based on Schenk’s approach, which includes heterojunction band offsets and can be easily implemented into device simulators.

Within Schenk’s approach, the band-to-trap tunneling is modeled [1] as the Shockley-Read-Hall recombination with the field-dependent carrier lifetime τ(T, F) given by Fig. 1(a), where T and F denote temperature and electric field respectively, Et is the trap binding energy measured from the band edge, and I(z) denotes the modified Bessel function. Characteristics of band profile, including the effect of electric field, affect the field enhancement factor g(T, F) through the 3D tunneling density of states (DOS) ρF(E). Schenk used the constant field DOS expression in his original model, which is a reasonable approximation for homojunction devices. However, detailed calculations in Ref. [5] show that the E-B junction band offsets in HBTs can significantly increase the DOS near the junction. Myers [5] computes the DOS by numerically solving the Schrodinger equation for the actual potential profile in a NPN HBT. Different from Ref. [5], we approximate the actual potential (e.g., black curve in Fig. 1b) by a linear potential with band offset (red curve in Fig. 1b), and develop an analytic DOS model that includes the band offset, for efficiency and easy implementation in device simulation. The new DOS model is obtained through the following steps: (i) separate the plane parallel to the heterojunction from the direction perpendicular to the junction and use the zero-field 2D DOS for the parallel plane; (ii) approximate the 1D potential along the perpendicular direction using a piece-wise linear profile with band offsets and analytically solve for the wave function in each region with open boundaries at the two outmost ends; (iii) normalize the 1D wave functions according to the Dirac Delta normalization condition [6]; (iv) compute the 3D tunneling DOS that goes into the Schenk model from the zero-field 2D DOS and the normalized 1D wave functions.

Figure 1(c) shows a comparison of the 3D tunneling DOS versus carrier energies, computed by several methods, for the red potential in Fig. 1(b). The constant field DOS expression depends only on the field strength, not on the spatial location, as shown by the black solid curve. The color solid curves were obtained using the Fortran code provided by Myers [5] that numerically solves the Schrodinger equation and computes the DOS for the red potential. The color dashed curves were computed using the analytic DOS model proposed in this work. As expected, our analytic model produces the same DOS as those of the numerical method for the given potential. It is clearly seen that, when taking account of the heterojunction band offset, the DOS can be much higher than that of the constant field approximation. In particular, the closer the trap is located to the heterojunction, the higher the DOS is than the constant field value. For example, at 5 nm from the junction, the computed DOS using our model is more than ten orders of magnitude higher than that of the constant field expression for energies of 0.25 eV below the band edge. The substantially increased DOS near the heterojunction is expected to significantly enhance the band-to-trap tunneling in the vicinity of the junction. It turns out that the proposed DOS model can be generalized to arbitrary piece-wise linear 1D potentials. The band-to-trap tunneling model with the new DOS is being implemented in CHARON, an open-source multi-dimensional parallel TCAD code developed at Sandia National Laboratories. 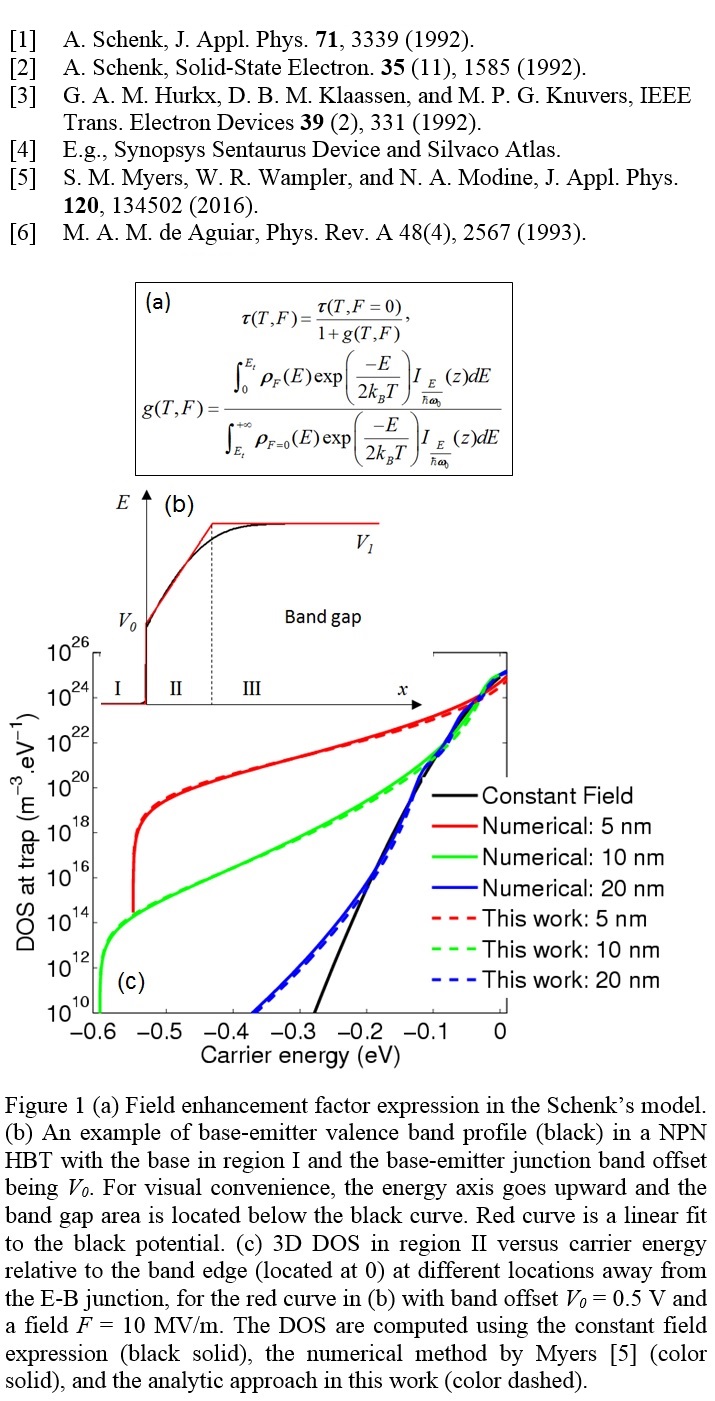