Chesapeake I (Gaylord National Resort and Convention Center)
A. Hinckley, E. Foster, T. Corley, and A. J. Muscat (University of Arizona)
III-V materials could be a substitute for Si and Ge in semiconductor device development because they possess higher carrier mobilities. Wet chemical cleaning and patterning of III-Vs produces soluble species that can remain in the liquid phase, precipitate as solids and remain on the surface, or evaporate as gases. Because etching products contain elements such as In, As, and Sb, they can pose health risks during industrial wafer processing. To better understand the products generated from III-V etching, vapor-phase arsenic levels were measured above wet etching solutions commonly used to clean or etch GaAs. A differentially pumped mass spectrometer system was used to sample the vapor above the etching solution at atmospheric pressure. The mass fragments detected as a function of time were used to determine the arsenic species present and estimate concentrations.

Mass fragments corresponding to AsO+, AsH2+ and AsH3+ were detected above GaAs immersed in aqueous HF at room temperature. The partial pressure of the etching products was on the order of 0.1 mTorr. Using N2as a reference, the total gas-phase arsenic concentration above 0.6 M and 28.9 M aqueous HF was approximately 1 ppm and 2 ppm, respectively. These concentrations are about 400 times the Permissible Exposure Limit (PEL) set by the Occupational and Safety Health Administration (OSHA) for inorganic arsenic species. Gallium was not detected in the vapor phase. Inductively-coupled plasma mass spectrometry (ICP-MS) was used to measure etching species in solution. The Ga concentration was higher than that of As by a factor of 100. Combining these techniques, a mass balance was closed between liquid and vapor phase arsenic species within approximately 1 nmol.

Etching GaAs in aqueous SC-2 (HCl and H2O2 in DI water) solutions produced AsO+, AsH2+ and AsH3+ in the vapor phase. The total gas-phase arsenic concentration above SC-2 was 5 nmol (about 4 mg/m3) regardless of the reactant concentration. The concentration of AsO+ increased by a factor of 2 when vapor was collected for 30 min prior to measurement. One interpretation is that etching produces AsCl3 which hydrolyzes readily in the liquid or gas phase. To test this hypothesis, arsenic species were examined as a function of time above a GaAs coupon in partially aqueous SC-2 (HCl:H2O2:H2O:CH3OH, 4:3:12:250 v/v). Figure 1 shows mass spectra after pulses of product gases were sampled above the solution. The total gas-phase arsenic concentration increased by a factor of 3.3 when GaAs was etched in partially aqueous SC-2. The primary arsenic fragment was As+, and Cl+ increased by a factor of 5 with respect to GaAs etched in aqueous SC-2. The comparison of As and Cl fragments detected to known cracking patterns supports the hypothesis that AsCl3is produced during etching of GaAs and is hydrolyzed. Speciation of etching products will be compared to OSHA PEL standards for inorganic arsenic species to identify potential hazards present in III-V manufacturing. 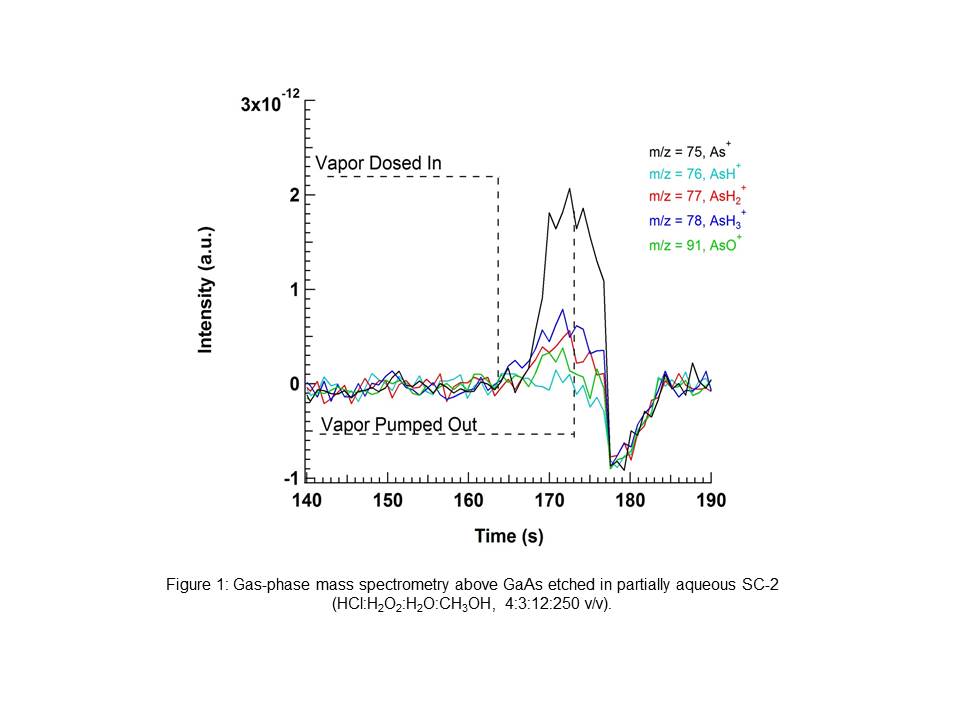