Al sheet samples of 99.998% purity were exposed at open circuit in either 0.4 M H3PO4 or 0.4 M H2SO4 solutions. In situ stress measurements during acid dissolution were carried out by phase-shifting curvature interferometry (6). According to the thin-film Stoney approximation, the detected sample curvature changes are directly related to the surface force change per sample width. The force per width is the biaxial in-plane stress integrated through the sample thickness. XPS was performed with a K-alpha instrument (Thermo Scientific) (7). The relative concentrations of P, S, Al, and O in the oxide were determined from areas of P2s, S2s, Al2p, O1s peaks. The oxide thickness and the anion concentration per area were determined from the relative areas of the Al2p peak contributions from oxide and metal.

Fig. 1 shows that upon immersion of Al in both acids, force per width increased abruptly in the compressive direction to 2 min, and then relaxed slowly to constant levels. The initial compressive increases are not due to mechanical disturbances, as they significantly exceed the stress change in distilled water. The hypothetical anion incorporation-induced stress was calculated from the anion concentration per area by assuming that all the detected anions are absorbed within the oxide. The elastic force per width accompanying incorporation is then

where WA is the anion molar volume, Eox and nox the elastic modulus and Poisson's ratio of alumina, and NA the per-area anion concentration from XPS. Fig. 1 shows that for dissolution in H2SO4, FwA is in excellent agreement with the measured force at all times. For H3PO4, agreement during the initial compressive increase is found but thereafter phosphate adsorption causes the calculation to diverge. Fig. 1 is strong evidence that anion incorporation in alumina films induces compressive stress. The stress of ~ 2 GPa inferred from the figure are comparable to near-surface stress levels measured earlier in anodic films (5).

Additionally, we discuss evidence for anion-incorporated surface layers in anodic alumina from high-voltage cyclic voltammetry (CV) experiments (8). At high scan rates, the current-voltage dependence in the cathodic-direction scan reveals the conduction characteristics of the anodic film. By varying the anodic potential limit of CV, the dependences of conduction on both film thickness and electric field are assessed. High-resistivity surface layers are revealed in anodic films formed in phosphoric, sulfuric and oxalic acids. An instability mechanism for anodic alumina is described in which both the high resistivity and elevated stress level of the anion-containing near-surface layer play important roles. 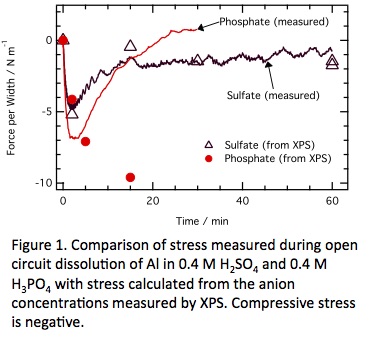