Chesapeake H (Gaylord National Resort and Convention Center)
G. R. Stafford and U. Bertocci (National Institute of Standards and Technology)
Wafer curvature and cantilever bending techniques have been used by the electrochemical community to examine stress development during electrochemical processing. Surface stress changes as low as 10−3 N/m can typically be resolved from cantilever electrodes immersed in solution and under potential control. Such resolution makes this measurement useful for examining virtually all aspects of electrochemistry; i.e., electrocapillarity, adsorption processes, underpotential deposition, electrodeposition, etc. Often these processes occur either simultaneously or in rapid succession and we are often limited to measuring the influence of the dominant process in the time-scale of the experiment. Similar to electrochemical impedance spectroscopy (EIS) where electrochemical processes with different characteristic time constants can be separated, dynamic stress analysis (DSA) allows us to study the dynamics of any particular stress-generating process and link the stress to specific electrochemical and surface phenomena. We have demonstrated the technique by examining the electrocapillarity (charge-induced stress) of both Pt and Au in HClO4 electrolyte.1,2 In this case the figure of merit is the stress-charge coefficient (ς) which captures the fundamental surface mechanics associated with charging the electrode surface and can be obtained from the following equation,

where Ze is the electrochemical impedance, Ys is the stress admittance (with units of N/(V-m), ω is the angular frequency, and j =√-1. In this talk, we use DSA to examine the underpotential deposition (upd) of Cu onto (111)-textured Au cantilever electrodes from 0.1 M H2SO4 containing 0.01 M CuSO4.

Figure 1(a) shows the potentiodynamic scan and surface stress response of a Au cantilever electrode in the potential region covering both Cu upd and Au oxide formation. Cu upd clearly exhibits the two distinct electrochemical steps that have been well-described in the literature. A prominent feature of the surface stress response is the significant change in the double layer region. This can be attributed to both electrocapillarity and sulfate adsorption/desorption. The stress response in the Cu upd region suggests that the honeycomb structure has little impact on the surface stress as the response seems to naturally extend from the double layer region. However, completion of the Cu monolayer, which includes the re-adsorption of sulfate onto the Cu surface, causes a -0.5 N/m shift in the surface stress. Interestingly, the large tensile stress expected from the +12.8 % lattice misfit between Cu and Au is absent. This is in part due to the interfacial contributions to the stress as well as the stabilizing influence of the sulfate adlayer.3

DSA can provide additional information on the relationship between surface stress and charge density. Figure 1(b) shows the phase angle of the stress-charge coefficient (ς) in the potential range of interest. The steady-state potential was stepped in 10 mV increments with a superimposed AC signal of ±10 mV at 10 Hz. In the absence of Cu2+ the phase angle of the stress with respect to the charge remains constant at 180°; i.e., negative charge produces tensile stress. This is a normal electrocapillarity response for Au in sulfuric acid at these potentials. However, in the presence of Cu2+, the phase angle begins to increase in the earliest stages of Cu upd, suggesting that the stress response for the honeycomb structure does indeed have a unique response that can be separated from that of electrocapillarity. With proper use of an equivalent circuit that adequately describes the electrochemical impedance, one should be able to obtain unique stress-charge coefficients that capture both the electrocapillarity and Cu upd response as a function of potential. 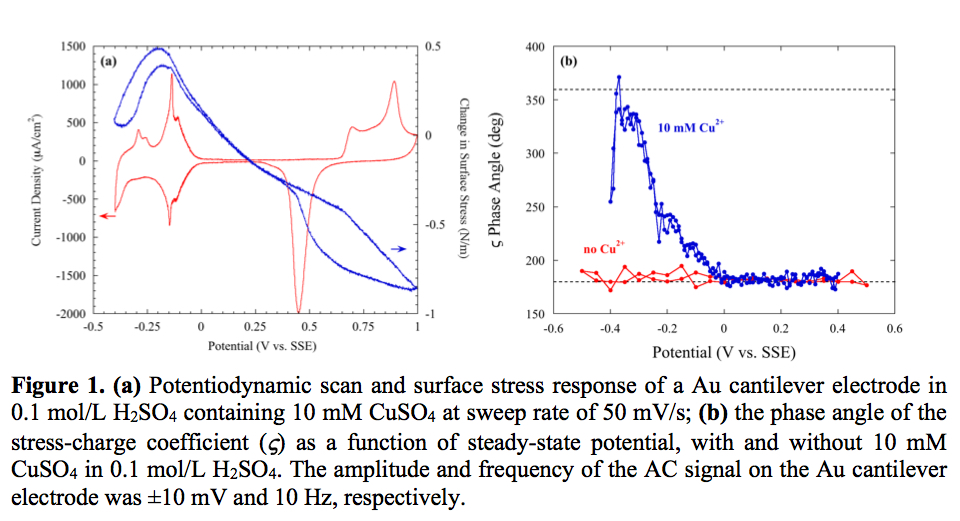