Chesapeake A (Gaylord National Resort and Convention Center)
E. A. Douglas, M. Brumbach, B. Klein, A. G. Baca, and A. A. Allerman (Sandia National Laboratories)
High electron mobility transistors (HEMTs) with AlGaN channels are excellent candidates for high-power applications due to increased bandgap and electric field as compared to GaN channel HEMTs. An increase in critical electric field is achieved by increasing the Al mole fraction of both the barrier and channel layer of the HEMT to AlyGa1-yN/AlxGa1-xN, where y>x≥0.3. However, the effects of the fabrication process on the surface of high Al content AlGaN has yet to be studied.

As AlyGa1-yN/AlxGa1-xN HEMTs gain interest for a variety of applications, unintended modifications to the surface of the AlGaN can have unintended consequences to device performance. X-ray photoelectron spectroscopy (XPS) was performed on Al0.45Ga0.55N/Al0.3Ga0.7N heterostructure. XPS indicated that native surface oxidation of Al0.45Ga0.55N occurs in as-grown material stored at ambient of approximately 8 atomic %. A standard low power microwave O2 ash is a standard process performed to remove organic contamination and descum after photolithography. Though an Al0.45Ga0.55N sample exposed to an O2 ash indicated a slight decrease in C, an increase in the surface oxidation from approximately 8 atomic % (as grown) to approximately 20 atomic % after O2 plasma was observed (Fig. 1). XPS spectra show that after exposure to an O2 ash, oxygen is binding to both Ga and Al. This has substantial implications for device performance and integration schemes for heterostructures with increasing Al content. As the presence of an oxide interlayer can have large implications to Schottky contacts, the effect of an HCl clean to remove the native oxide was investigated. Even after exposure to a 35% HCl dilute in H2O, the O atomic % decreased from 8% to only 6%. Presuming that lower oxygen surface content is desirable, the HCl clean offers a tangible benefit for the surface of Al0.45Ga0.55N/Al0.3Ga0.7N heterostructures.

This work was supported by the Laboratory Directed Research and Development (LDRD) program at Sandia. Sandia National Laboratories is a multi-mission laboratory managed and operated by Sandia Corporation, a wholly owned subsidiary of Lockheed Martin Corporation, for the U.S. Department of Energy's National Nuclear Security Administration under contract DE-AC04-94AL85000. 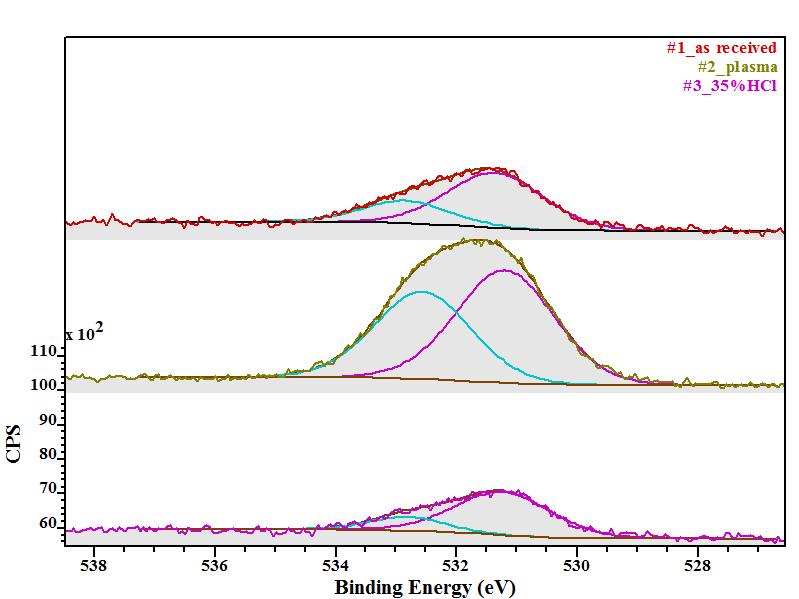