Electroless Ni and Cu PTH. 10 mil and 20 mil PTH were fabricated in Low Temperature and High Temperature Co-fired Ceramic substrates (LTCC and HTCC, respectively). The ceramic surfaces were pre-cleaned and etched in organic solvent and alkaline solutions before an activation step. Surface activations for electroless plating were performed by using one of two methods: tin-based sensitization or silanization followed by palladium activation. A conformal barrier layer was applied to ceramic substrates via electroless plating. Nickel barrier and copper seed layers were electrolessly plated on activated LTCC substrates. Both nickel and copper readily plate inside the vias as well as on exposed surfaces.

Cu PTH. Copper electroplating was performed in a suppression-based plating solution on LTCC/HTCC blanket and patterned via substrates after Ni/Cu barrier/seed layer deposition. Pulse-reverse plating in the plating solution containing two suppressors/surfactants was used to completely fill the holes and obtained a smooth copper surface (Fig. 1). The reverse-current step removes copper from the surface. Reverse-current step combined with the agitation of the plating solution are important for hole fill because it removes peaks, bulges and ridges preferentially. This eliminates buildup along the hole (via) edges that might cause the tops and bottoms to fill before the center, leaving large crevices within the via. Blanket plated substrates were analyzed in various ways post electroplating, including optical microscopy, profilometer, and adhesion testing. For Instron testing, many samples broke at the epoxy site rather than the plated copper layer. Adhesion between the copper and substrate was over 2.6 MPa.

Testing Results. Thermal shock testing of NANO3D’s PTH substrates showed promising results for the adhesion of the Cu to the ceramic substrates. Only one of the samples showed obvious delamination after 500 cycles of thermal shock (Fig. 2). Of the five samples of commercial DBC used, only two alumina samples survived the 500 cycles. Both the aluminum nitride DBC showed signs of cracking in the ceramic after 200 cycles (Fig. 2). One alumina sample started showing signs of delamination around 200 cycles as well. SAM images showed the delamination in the failed samples and showed minimal delamination in a few others that was not visible under the microscope. 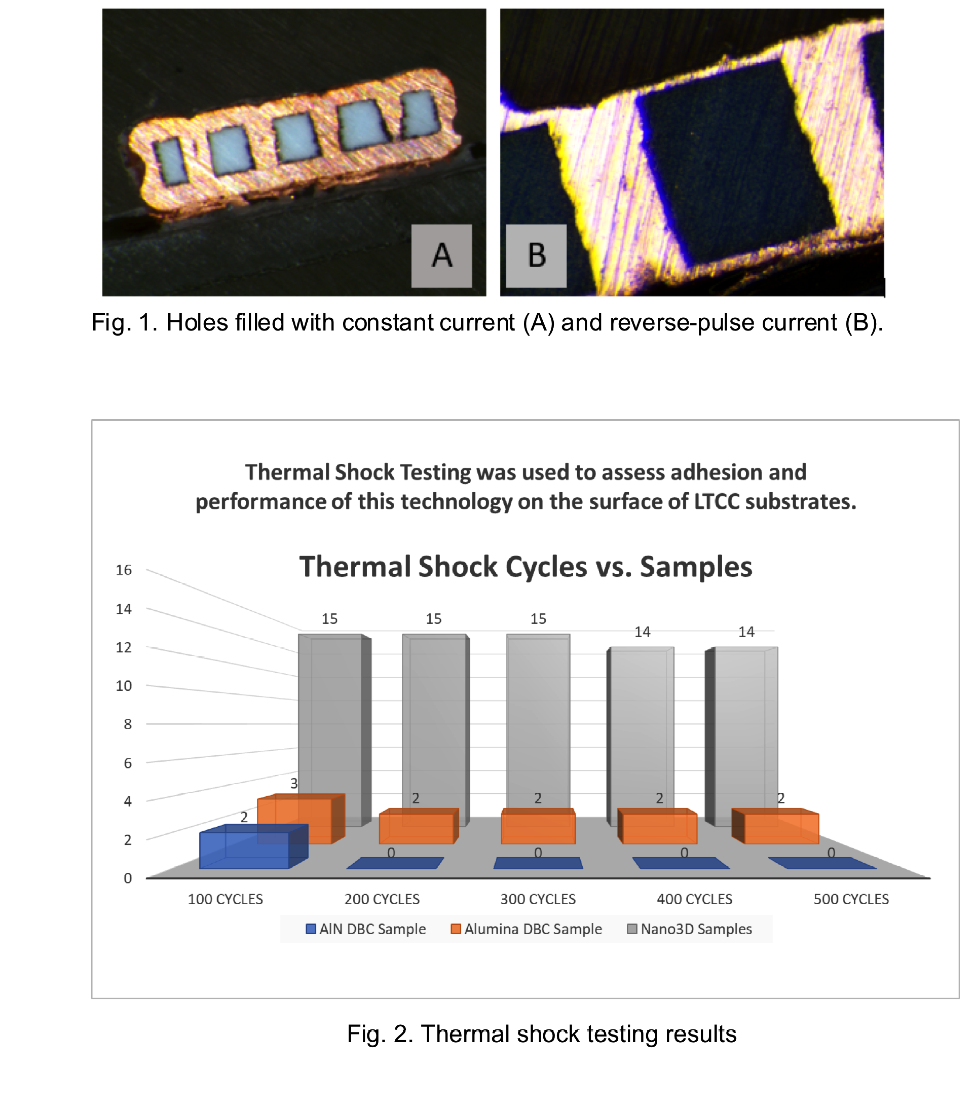