Taylor, Ground Level (Hilton Orlando Bonnet Creek)
X. Liu (Texas A&M University, Ohio University), Y. Kuo, S. Zhang (Texas A&M University), and T. Yuan (Ohio University)
When the MOSFET with the SiO2 gate dielectric is scaled down to the nanosize, the leakage current becomes very large and the dopant can easily diffuse to the channel region to degrade the device’s performance and reliability [1]. To solve these problems, a physically thicker high dielectric constant (high-k) film with the same equivalent oxide thickness (EOT) as the SiO2 film is used. For the conventional floating gate (FG) memory device, a poly-Si layer is embedded in the silicon dioxide (SiO2) gate dielectric to trap charges. Because of the large band offsets between Si and SiO2, a large operating voltage is required to achieve the acceptable write/erase efficiency and the tunnel oxide layer has to be thick enough to retain the trapped charges [2]. Since the high-k dielectric has lower band offsets with Si than the SiO2 film has, it can be used as the tunnel oxide to solve the above power consumption and charge retention problems.  Separately, it has been proved that the Zr-doped HfO2 (ZrHfO) has better bulk and interface properties, such as a higher crystallization temperature, lower interfacial layer thickness, and lower interface density of states, than the undopd HfO2 has [3]. Also, the memory functions of the nc-ZnO or nc-MoOx embedded capacitor are affected by light exposure [4,5]. In this study, MOS capacitors made of the AlOx embedded ZrHfO high-kgate dielectric are fabricated and studied for the light wavelength effects on the memory functions.

The ZrHfO/AlOx/ZrHfO tri-layer gate dielectric stack was sputter deposited on the HF pre-cleaned p-type Si (100) wafer (1015 cm-3) in a one-pump-down process without breaking the vacuum. The bottom (tunnel oxide) and top ZrHfO (control oxide) layers were sputtered from a composite Zr/Hf (12/88 wt %) target in an Ar/O2 (1:1) mixture at 5 mTorr and 60 W for 2 and 10 min, respectively. The embedded AlOx film was deposited from the Al target in Ar/O2 (1:1) at 5 mTorr and 80 W for 1 min. The post deposition annealing (PDA) step was done with rapid thermal annealing (RTA) at 800°C in the N2 ambient for 3 min. An ITO film was sputtered on the high-k surface and wet etched into gate electrodes. An Al film was sputter deposited on the backside of the wafer for ohmic contact. The final post metal annealing (PMA) condition was 400°C, H2/N2(10/90) for 5 min.

Fig. 1 shows C-V hysteresis curves of the control sample, i.e., without the embedded AlOx layer and the AlOx embedded ZrHfO capacitor measured at two different gate voltages (Vg) sweeping ranges in dark. The memory window of the control sample is very small, i.e., the shift the flat band voltages (DVFB’s) in the C-V hysteresis curves are almost negligible. However, the AlOx embedded sample has much larger memory windows, i.e., the counter-clockwise hysteresis curves with large DVFB’s.  The DVFB increases with the increase of magnitude of the beginning Vg. Therefore, the memory window is mainly contributed by the trap of holes to the embedded AlOxfilm.

Fig. 2 Shows the C-V hysteresis curves of the AlOx embedded capacitor with the ITO gate electrode measured in dark and under the red and blue LED light exposures. The VFB’s of both forward and backward curves under red and blue light exposures shift to the positive Vg direction compared with those in the dark. The curves under the blue light exposure shift slightly more toward the positive Vg direction than that under the red light exposure. This phenomenon is caused by the electron-hole pairs generation in the Si substrate under the light exposure [4]. The difference in the magnitude of the VFB shift is due to the band energy difference of the two lights. The blue light has a wavelength of 470 nm equivalent to 2.6 eV and the red light has a wavelength of 625 nm equivalent to 1.98 eV. The nc-MoOx embedded ZrHfO capacitor showed the similar C-Vcurve shift phenomenon [5].

Figure 3 shows the J-V curves of the same AlOx embedded sample as those of Fig. 2 in dark and under red and blue light exposures. The Vg was swept from -5V to +5V. In the negative Vg region, the leakage current in the dark is slightly larger than that under the light exposure condition. In the positive Vg region, the leakage current under the light exposure condition is much larger than that in the dark especially at Vg > 2V. In addition, two peaks are observed in the J-V measured in dark. The first peak is contributed by the release of trapped holes due to change of Vg polarity and the second peak is due to the Coulomb blockade effect. Under the light exposure conditions, only the first peak is observed. The Coulomb blockade effect disappears because of the easy transfer of charges through the embedded thin AlOx layer. The leakage current change is related to the thickness of the gate dielectric film and the charge trapping capability of the embedded AlOxfilm. 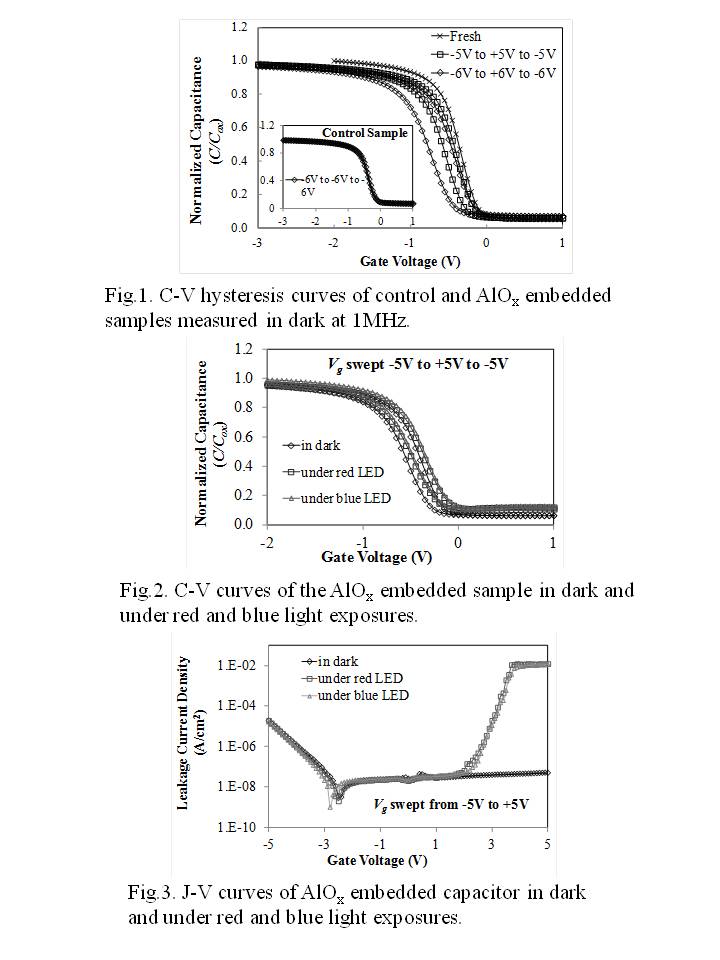