Patterning of ALD films for various device applications is commonly performed by removing the specific part of the film or by selectively depositing films on specific areas of the surface. In the former method, patterning is done with the use of extra processing steps such as etching, lithography etc. The latter method involves the use of masking layers to prevent ALD on specific areas.1, 2 Maskless ALD, i.e., surface selective atomic layer deposition of thin films has recently garnered considerable interest due to its simplicity. This method of patterning ALD films is unique in that no surface mask is required. Materials nucleate on different surfaces to different extents. This difference in nucleation time is used to achieve selective atomic layer deposition (SALD). In our earlier studies on SALD of HfO2 and TiO2, we used water as the oxygen source.3, 4

In this study, ALD of HfO2 was carried out using tetrakis(diethylamino)hafnium and a primary alcohol (ethanol) in a custom built ALD reactor (Fig. 1). Unlike common ALD processes, here we used ethanol as the oxygen source. Ethanol reacts with the hydroxyl (-OH) groups on silicon surface and forms alkoxides that serve as a starting surface for the ALD film growth. Thus the film growth is obtained on the Si surface. Figure 2 shows the thickness tunability of the HfO2 ALD process on Si surface using ethanol as the oxygen source. HfO2 was found to grow at a rate of 0.05 nm/cycle, without any growth inhibition on the silicon surface. Linear dependence indicates self-limited growth of HfO2 thin film, typical to the ALD process. On the other hand, significant growth delay was observed on copper surface. The use of ethanol reduces surface copper oxide into metallic copper and reduces the number of potential ALD nucleation sites. Thus selective deposition of HfO2 was achieved on silicon surface over copper surface. Such selectivity depends on many ALD processing parameters and substrate pretreatment conditions. In this report, the effect of these parameters on the extent of selectivity will be discussed in detail along with copper diffusion barrier characteristics of such selectively deposited ultrathin (1-2 nm-thick) HfO2 layers. The growth rate on silicon side was measured using spectral ellipsometry. X-ray photoelectron spectroscopy was used to probe the presence of HfO­2 on copper surface. Results of this study can be used to selectively deposit ultra-thin layers of HfO2 on silicon surface over copper surface for copper diffusion barrier applications.

This work was supported in part by the National Science Foundation (CBET 1067424 and EEC 1062943). We also thank Dr. Gregory Jursich for many helpful discussions. 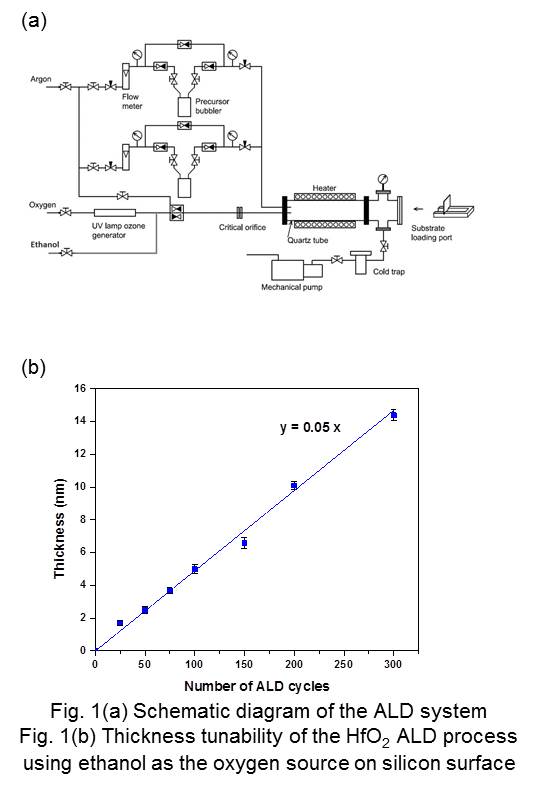