Grand Foyer, Lobby Level (Hilton Orlando Bonnet Creek)
K. Kanomata, H. Ohba, P. P. Pansila, T. Suzuki, B. Ahmmad, S. Kubota, K. Hirahara, and F. Hirose (Yamagata University)
The sizes of integrated semiconductor devices such as metal oxide semiconductor (MOS), have reached to submicron range where the gate oxide films are needed to fabricate at a nanometer scale. Atomic layer deposition (ALD) is a potential technique for depositing dielectric films with monolayer precision by repeating adsorption of a source gas on a substrate that is subsequently reactivated for further adsorption [1]. HfO2 is believed to be a candidate as the high-k gate oxide material [2]. The growth temperature for the HfO2 deposition has been desired to be decreased to near room temperature because the interfacial layer is formed by the solid phase reaction with heating processes [3]. We developed a room-temperature (RT) atomic layer deposition technique for HfO2 deposition by using tetrakis(ethylmethylamino)-hafnium (TEMAH) as a precursor and a remote-plasma excited oxidizing gas.

A p-type Si(100) substrate with a resistivity of 8-12 Ωcm was used as a sample. Prior to the experiment, the sample was cleaned with buffered HF acid solution and sulfuric acid-hydrogen peroxide mixture solution. As a hafnium source, TEMAH precursor was introduced in a variable leak valve. A remote-plasma system generating excited oxidizing gas was installed to the ALD chamber as shown in Fig.1. The source gas for the oxidizing gas is a mixture of H2O vapor and a carrier gas. The plasma was generated in a glass tube with an induction coil with a frequency of 13.56MHz and a RF power of 30 W. Before the ALD process, the substrate surface was treated with the plasma excited oxidizing gas for 5 min to be terminated with OH groups. For the HfO2 deposition, we repeated the cycle of TEMAH saturation and the oxidizing gas treatment at RT. The TEMAH exposure was set to 1.67×10-3 Torr×60 s. The saturation of TEMAH on the hydroxylated Si surface has been confirmed by IR absorption spectroscopy. The plasma excited oxidizing gas was injected for 2 min. The oxidization state of HfO2 film was evaluated by X-ray photoelectron spectroscopy (XPS). The thickness of the grown film was measured by spectroscopic ellipsometry.

Fig.2 shows XPS spectra for Hf4f of HfO2 film grown on Si by the present ALD technique. The peak position of 16eV indicates the growth of HfO2 on Si. It is found that with the increase in the ALD cycles, the intensity of Hf 4f7/2 peak increases. We also checked the composition of HfO2 using XPS analysis. The ratio of Hf and O was calculated to be 1:2.06. The small amount of N as the impurity was detected as an impurity in the film (data not shown). We are now evaluating the concentration of the residual carbon in the film.

Fig.3 shows the HfO2 thicknesses as a function of the ALD cycle. The linear increase in the HfO2 thickness with the ALD cycles indicates that the HfO2 is grown on Si with a constant rate in the ALD mode. The growth rate is estimated to be 0.26 nm/cycle. This value is comparable with those reported in previous ALD studies [4].

To conclude, we successfully developed a non-heating ALD technique for HfO2 deposition at room temperature using a remote-plasma source. We are now investigating the electrical characteristics of HfO2 grown on Si and Ge as a MOS device. Moreover, the RT grown HfO2 films might be applicable in acid proof coatings on plastic materials. Detail will be presented at the conference. 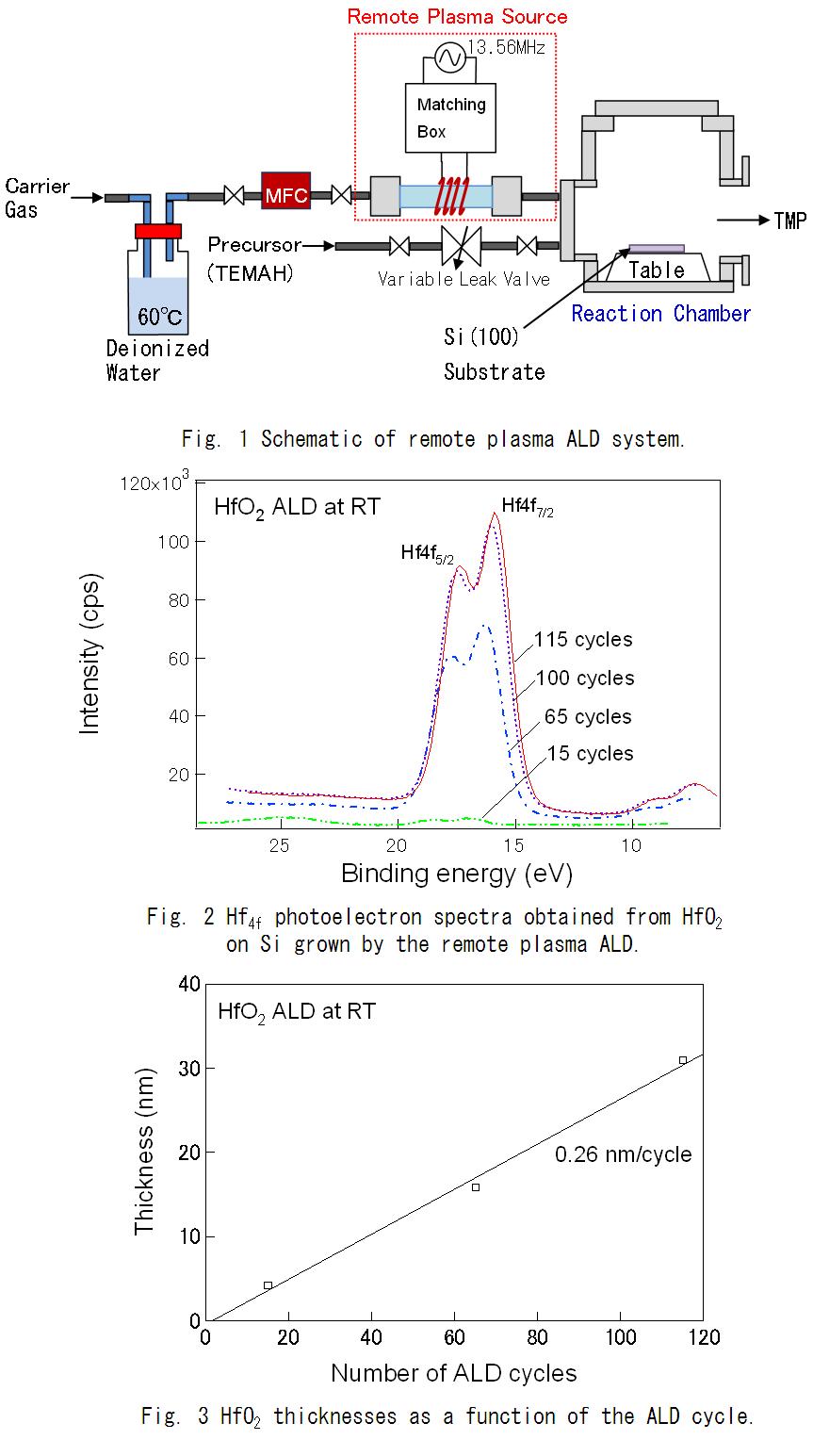