Taylor, Ground Level (Hilton Orlando Bonnet Creek)
J. J. Kopanski, L. You, J. J. Ahn, E. Hitz, and Y. S. Obeng (NIST)
Scanning probe microscopes (SPMs) have remarkable sensitivity to the surface. The scanning tunneling microscope, for example, is sensitive to tunneling between the tip and the first few atomic layers of the surface. However, SPMs that measure quantities due to surface potential (scanning Kelvin force microscopy, SKFM), magnetic field (magnetic force microscopy, MFM), or capacitance (scanning capacitance microscopy, SCM) can be sensitive to the electrical properties of regions many micrometers from the terminal tip location. This ability to gather information from a large volume opens up the possibility of extending the range of SPMs into the subsurface of materials.

We are trying to image subsurface metal lines in an insulating matrix from their potential via SKFM and via their current density/ magnetic fields via MFM. Towards this end we have produced two test chips. One containing isolated metal lines and squares of Cr, Al, or Au [1] and a second containing metal interconnect lines buried within an insulator at 4 discrete depths. The buried metal lines can be biased to produce various patterns of electric or magnetic field that can be imaged at the surface with the appropriate SPM. The test chip has been designed so that the bonding pads are to one side, leaving clearance for the active regions to be probed with a cantilevered SPM probe.

Various test structures from this chip have been simulated with a simple analytical model and with the COMSOL Multiphysics software. Basic simulation geometry consists of three metal lines, 1.2-μm in width, separated by 1.2 μm, and buried beneath an insulating layer of varying depth. COMSOL was utilized to simulate the potential at the surface of the insulator. This potential should be measurable with the scanning Kelvin force microscope. While quite sharp transitions in the surface potential are observed for the basic structure, insertion of a probe with the shape of a real SKFM probe into the simulation substantially dampens the spatial resolution. This result emphasizes the need for high aspect probes and advanced Kelvin force imaging to adequately resolve buried conductors with an insulating matrix [2]. Similar simulations were conducted of the magnetic field due to various current densities.

The other test structure used in this work consists of isolated metal lines and squares with different work functions. While relatively large, these structures are helping us determine the ability of SKFM to detect the subsurface structure of nano-composites of conducting particles within an insulating matrix.

A complimentary set of experiments is also underway to investigate the ability of SPMs to image insulators buried within conducting matrices. In this work, the scanning microwave microscope (SMM) is being used to detect voids and buried insulating lines in metal. The SMM couples a vector network analyzer to an AFM tip [3]. The reflected s11microwave signal over the frequency range from 0.01 GHz to 18 GHz can be examined. Subsurface imaging with this technique is possible due to variations of the skin depth with frequency [4]. For many metals the skin depth varies from around 1 μm to 50 μm over this frequency range. A desired application of this work is the ability to detect and image voids in through silicon vias (TSVs) for three-dimensional integrated circuits.

*Official contributions by the National Institute of Standards and Technology are not subject to copyright.

**Certain commercial equipment, instruments, or materials are identified in this paper in order to adequately specify the experimental procedure.  Such identification does not imply recommendation or endorsement by NIST, nor does it imply that the materials or equipment used are necessarily the best available for the purpose. 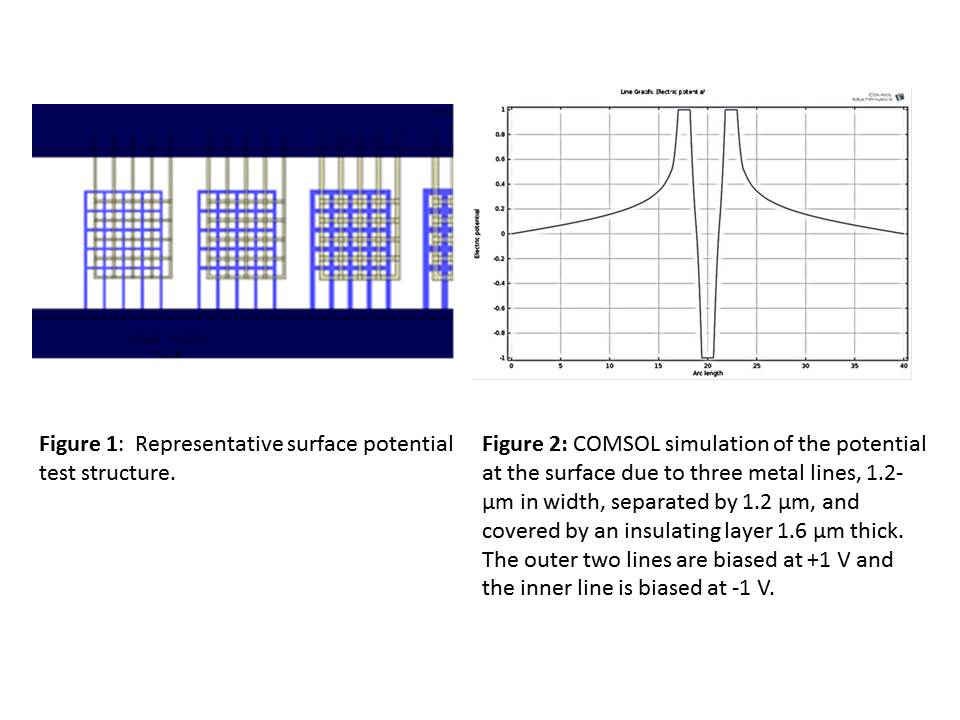