In the present study, the FCS method is extended for the analysis of particle size distributions of smaller-sized colloidal silica CMP abrasives. This new application of the FCS technique is motivated by the commercial need to further reduce wafer defect formation in conjunction with increased removal of slurry and wafer particulates produced during CMP processes. A key analytical capability gating this processing requirement is the necessity to analyze, quantitatively, the smallest abrasive particles in a CMP slurry which are present at extreme dilution. Established methods for particle size analysis, such as disc centrifugation and dynamic light scattering, typically lack the sensitivity required to analyze a minute fraction of abrasive particles, such as colloidal silica, with hydrodynamic diameters less than 20 nm in a CMP slurry. Because FCS has sizing capability for small molecules equivalent in hydrodynamic diameter (dh) to fluorescent dyes (dh = 1.0 to 1.5 nm) coupled with its analytical sensitivity in the nanomolar range, particle size distribution analysis of silica abrasive particles with mean diameters less than 10 nm, is potentially accessible via FCS.

Representative particle size distributions determined by FCS are shown in Figure 1 for a pair of related fluorescently-labeled silica dispersions. The data overlay in the figure compares the particle size distributions of a parent silica dispersion (solid line, mean hydrodynamic diameter = 45 nm) and that of the isolated supernatant of the dispersion obtained by ultracentrifugation of the parent dispersion in order to isolate the smallest particles (dashed line, mean hydrodynamic diameter = 11 nm) in the dispersion. These data demonstrate the ability of the FCS technique to detect and quantity the fraction of smallest particles in abrasive colloidal silica dispersions. Additional examples illustrating the range and applicability of the technique in the quantitative analysis of particle size distributions for representative silica particles used commonly in CMP abrasives are discussed in this presentation. 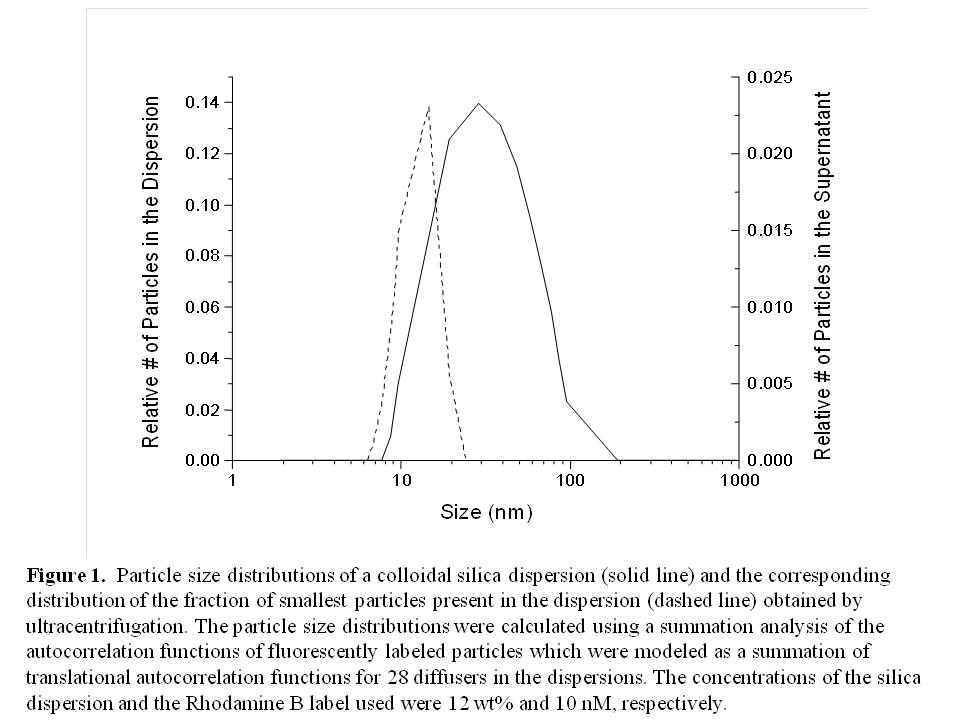