The growing demand on low power applications as well as the continuous scaling down of CMOS devices is facing strong physical limitation, among which the control of short channel effect. In the past decade, silicon industry made several drastic changes in CMOS architecture such as integration of copper interconnect, use of nitride gate oxide dielectrics, and its subsequent replacement by Hafnium silicate as gate dielectrics, use of epitaxial SiGe etc… Use of Silicon On Insulator substrates has been used for specific applications (Application processor, RF, Photonics) but not for mainstream application. ST Microelectronics successfully developed and brought to the mass production maturity level for the very first time a fully depleted SOI platform [1,2]. In this paper we will review the mains consequences of the integration of buried oxide on CMOS device reliability, since the presence of BOX under CMOS devices has already been largely referred in the literature as being responsible for parasitic self-polarization, or unwanted joule heating with negative impact on device reliability. First the reliability of BOX itself will be reviewed, BOX interface defect generation will be analyzed, then the used of body bias polarization on transistor degradation mechanisms (time dependent breakdown, negative bias temp instability, hot carrier injection) will be presented with a special focus on hci reliability and its dependence on body bias polarization.

FDSOI (Fully Depleted SOI, Figure 1) technology process has been evidenced as very attractive for low power application due to the very good control of short channel effects and very good isolation of neighboring devices. Besides, the use of undopped channel improves mobility in the channel mobility as well as device matching. Finally, the proposed architecture allows a wide range of operation back bias and the possibility to adapt the device performance or power consumption dynamically with very limited reliability penalty regardless the performance gain.

A direct comparison of 28nm bulk vs 28nm SOI technology shows that gate dielectrics related failure modes (time dependent breakdown and transistor parameter drift under vertical electrical field and / or hot carrier injection) are un-affected by the presence of buried oxide (Figure 4), since the vertical electrical field and gate stack composition are the same. At the same time, we also evidenced that additional back bias does not influence on tddb and BTI (Figure5). This finding is consistent with screening of applied back bias by the inversion layer. Additionally, we analyzed electrical defect signature to track the defect generation on the channel back-side[3,4]. It was found that in extreme back bias configuration only (>4-6V), defects can be generated at bottom interface. We also reported a full characterization of  Tsi (figure 6) and back bias (figure 7) effect on HCI defect generation confirming the primary effect of carrier energy over carrier density giving a comprehensive framework to the general behavior of 28FDSOI performance-reliability trade-off (figure 8).

28nm FDSOI devices were submitted to electrical reliability. Intrinsic buried oxide reliability as well as effect of Tsi and Vb on transistors failure mode were quantified to be implemented in circuit simulators. 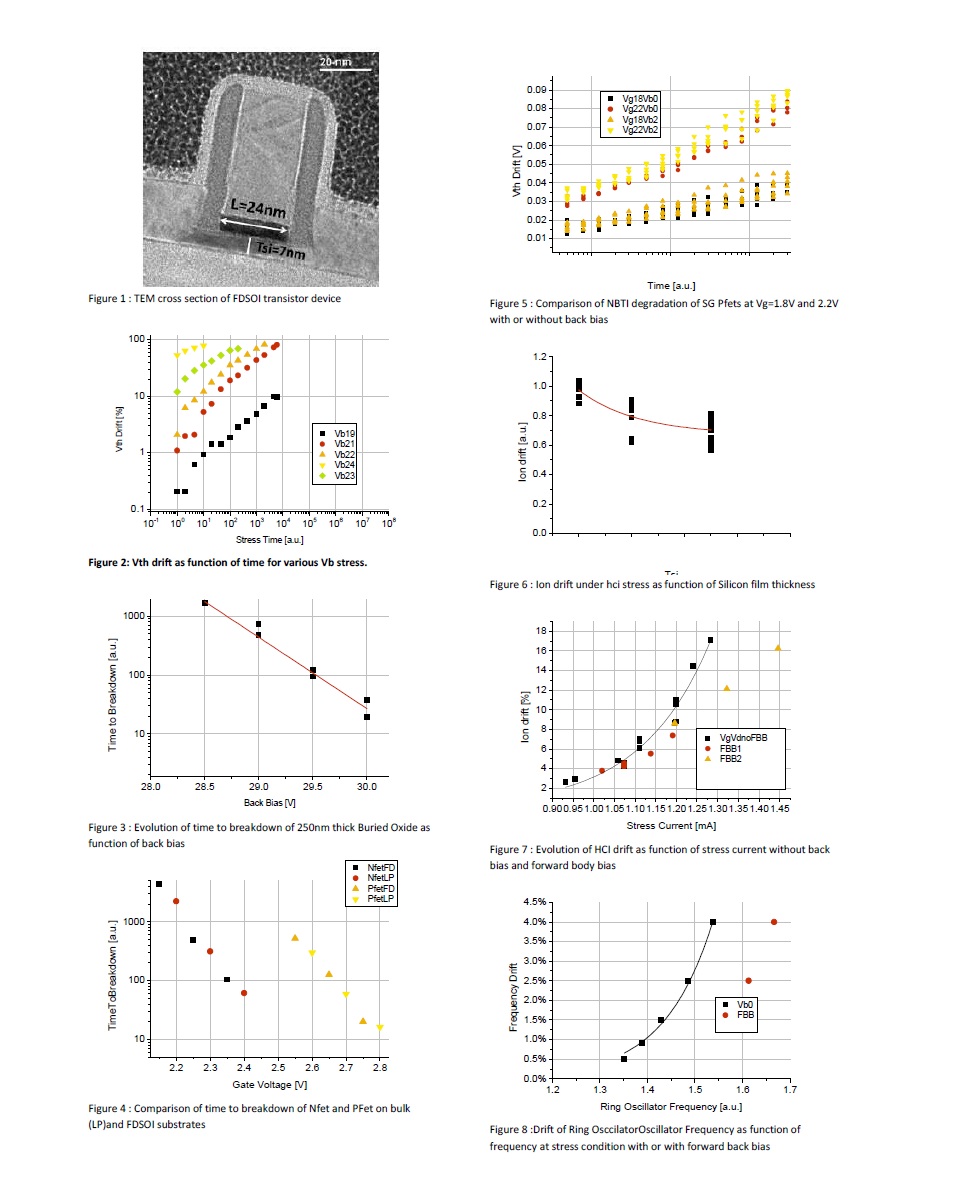