Expo Center, 1st Floor, Universal 8 (Moon Palace Resort)
S. T. Dunham, H. Lai, and R. Chen (University of Washington)
We utilize a hierarchical approach to atomistic modeling with density functional theory (DFT) calculations being used together with MD simulations and experimental observations to determine parameters for KLMC simulations. These methods are used to model epitaxial growth of strained group IV alloys and impurity redistribution in strained alloy nanostructures. We have developed kinetic lattice Monte Carlo (KLMC) methods in which the basic processes correspond directly to transitions at the atomic level. These methods are able to predict phenomena which rely on the local atomic structure, including diffusion at extremely high donor concentrations and impact of diffusion on alloy composition and anisotropic strain.

Use of group IV alloy species, particularly Ge, via selective epi and/or ion implantationMoving from a pure material, Si, to a random alloy such as SiGe (or SiGeCSn) means that every lattice site has a different local atomic arrangement and thus different atomic transition rate. We utilize kinetic lattice Monte Carlo (KLMC) methods within a hierarchical framework (DFT/MD/KLMC/FEM) in order to understand epitaxial film growth, impurity redistribution and extended defect formation processes on a fundamental level in nanoscale device structures based on group IV alloys. Within KLMC, alloy species (Si, Ge, C and Sn), substitutional dopants (e.g., B, P, As), point defects (I, V), dopant/defect pairs which control diffusion (e.g., BI, AsV), dopant complexes which control activation (e.g., B3I, As4V), and point defect aggregates (e.g., 311s, dislocation loops), as well as the transitions between these meta-stable structures can all be represented atomistically with a topology that matches the physical system. Thus, models can be made more realistic and therefore predictive than is possible with continuum or non-lattice-based kMC methods.

KLMC methods provide the crucial link needed for applying ab-initio results to nondilute systems (e.g., alloys, high doping levels). In KLMC, the system is considered to evolve between a series of metastable states, enabling direct atomistic simulation of material behavior for the long time scales (e.g., seconds) relevant for nanodevice fabrication. These methods are able to predict phenomena which rely on the local atomic structure, including orientation-dependent epitaxial growth, diffusion at extremely high donor concentrations and impact of diffusion on alloy composition and anisotropic strain. KLMC can also predict the correlated statistics of dopants, which have traditionally been ignored, but have a large impact on device variability.

Density functional theory (DFT) calculations show that the formation and migration energies of boron interstitial complexes in SiGe depend strongly on both the local stress tensor as well as the local arrangement of Ge atoms. Using transition/hopping rates calculated from DFT in KLMC simulations gives remarkably accurate prediction of B diffusion, segregation and solubility in strained SiGe structures. Ge enhances V-mediated diffusion due to Ge-V binding, but the lower concentration of Ge leads to tensile stress in the interdiffusion region that retards vacancy-mediated diffusion. We calculate binding energies and transition barriers for Si/Ge/Sn/B/As systems to determine KLMC parameters for simulations of impurity/alloy redistribution.

For modeling of epi gtrowth, DFT calculations are used to estimate the binding energies as function of local atomic arrangement and transition barrier energies for key processes such as adatom and edge diffusion, desorption, and layer incorporation. These calculations are then used to determine rates for KLMC simulation of the epitaxial growth process. Within this framework, complex phenomena such as faceting and orientation-dependent growth rate are a natural result of differences in binding energies and transition rates. We utilize molecular dynamics simulations as an additional supporting tool to connect DFT to KLMC and continuum simulations. Of particular interest for this work are MD calculations of local stress/strain based on distributions of alloy and dopant atoms. Note that lattice deformations are induced not only due to impurity incorporation but also by crystal surfaces and edges, leading to stresses even in pure Si systems. The effects of surfaces are most pronounced in nanoscale systems with large surface to volume ratios. Induced strains depend on surface orientation, so local anisotropic stresses can favor particular facets. The surface effect causes expansion in the surface plane and induces significant tensile strain even far away from the surface. A key challenge is incorporation of the effect of stresses due to impurity distributions on the redistribution of these and other impurities. We couple the KLMC simulations to MD simulations of local strain. These calculations are fully general and include impurity, point defect, extended defect and surface/interface strain effects. 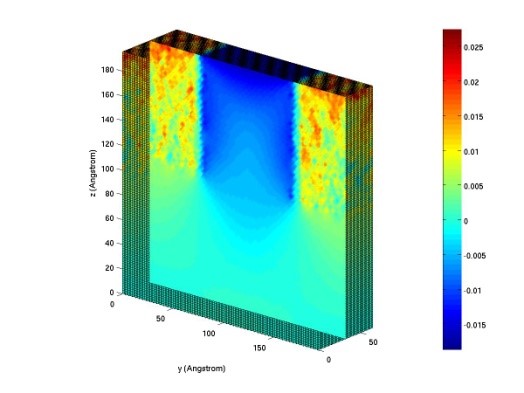