Nano-structure stiction during drying has often occurred due to scaling of semiconductor devices. Nano-structure contact caused by capillary forces is considered to cause the stiction [1][2]. The nano-structure stiction tends to be reduced by decreasing the surface tension of the rinsing liquid such as isopropyl alcohol (IPA), or using zero surface tension super critical fluid. Micro-electromechanical systems (MEMS) devices also have been faced on the stiction issue which is termed of “static friction”. Supposedly, it is caused by not only capillary forces but also adhesion forces, electrostatic forces, Van Der Walls forces and hydrogen bonding [3][4]. It is supposed that the release of the stiction is influenced by the correlation between the elastic restoring forces and the adhesion forces [5].

We have focused on the influence of the surface energy in order to release the stiction. Within the elastic limit, even if the nano-structures are deflected by capillary forces, they may be restored to their undeformed state after drying. We have illustrated the effect of the surface energy reduction process for high aspect-ratio nano-structures by both calculation and experimental data.

The adhering nano-structure is imitated as S-shaped beam (Figure1). The elastic restoring energy is

Where E is Young modulus, I is moment of inertia of area, s is half of space, h is detachment length, t is thickness and w is width (not shown). The adhesive energy is determined by the surface tension of the solid material (gs) and the area of contact (w(L-h)) in the opposite direction against the restoring energy.

To minimize the total energy (UT) given from UE+US indicates that the nano-structures are stable. If UTis larger than zero, the stiction is released. We calculated these energies for nano-structures of a single material such as silicon oxide. Figure 2 shows the calculated energy curves in condition A and B, respectively, given the parameters from Table I. When the surface tension is 70 mN/m [6] on condition A, the total energy minimizes at about a 220 nm detachment length. This means that the nano-structures with about an 80nm contact length remain adhered. When the surface tension is brought down to 22 mN/m (condition B), the total energy does not have a minimal point below a 300nm detachment length. This indicates that even the adhering nano-structures will be released.

We fabricated a 31nm half pitch line patterned structure of silicon oxide which is about a 320nm height. We obtained various line thickness samples by changing the etching time of diluted hydro-fluoride (DHF) treatment. As etched, the samples have a high surface energy (HSE). The state of the low surface energy (LSE) is achieved by using a surface modification agent. As shown in Figure 3, we plot the experimental data in STICTION as cross symbols, and in NO STICTION as open symbols, respectively, in each condition A (HSE) and B (LSE). Also the dotted line is a calculated curve in condition A. The solid line is calculated in condition B. The value of the surface energy is determined 22mN/m by a Zisman plot (not shown). In the left-hand area “Stiction” of the solid line, all the samples adhered. In the area ”Release Stiction”  between the solid and dotted lines, only the samples with LSE did  not adhere. This indicates that once the lines come in contact with each other, the elastic restoring force will release the stiction. In the area “Separation” under the dotted line, all the samples were not found not to have adhered. This means that the samples were kept separated over the whole process period. The experimental data correspond to the calculated lines very well. 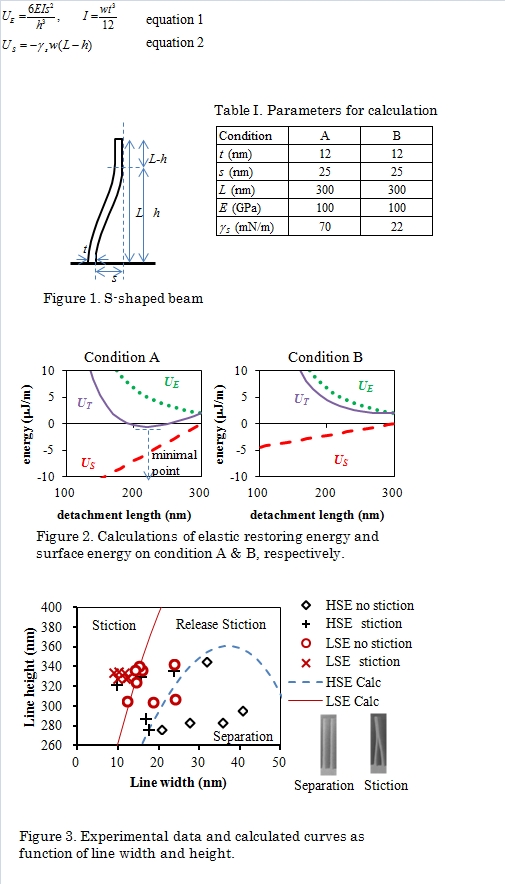