Continuous device shrinkage beyond 3X and 2X nm increases the number of critical clean processes in semiconductor manufacturing. In order to avoid cross contamination from reclaimed chemistry, single-pass chemistry has become more commonly used. This migration to single-pass started in the FEOL pre-gate cleaning process. In recent years, some BEOL clean processes have also started using single-pass due to the risk of defect formation on wafer surfaces with reclaimed chemistries. The major drawback of single- pass is the cost of the chemistry. In an effort to contain this higher cost, processes with lower medium flow rates are rapidly becoming more popular. In this paper, the risks associated with lower flow processes are discussed.

Single-wafer spin clean tools have been widely used in semiconductor manufacturing. In processes where mass transport is not the rate limiting step, reducing chemical consumption can be achieved by decreasing the medium flow rate. This approach yields acceptable results when the process is operated near ambient temperature or heating is provided by a substrate heater. The other risk associated with low flow processes is wafer surface dewetting which may result in non-uniform etching and/or reduces cleaning efficiency. A dewetting model for single wafer spin clean process has been developed to predict the process window of low flow processes. Based on this model, the minimum required medium flow rate to completely wet a surface with various contact angle is calculated. Good agreement between model predictions and experimental observations have been obtained.

The phenomenon of dewetting on a stationary surface has been studied in detail [1]. However, there is very limited information in the published literature on this topic on a spinning surface. On such a surface, a dynamical balance exists between the flowing liquid with the surface and interfacial energies. In this paper, this balance is characterized by the wetting and dewetting velocities. The liquid wetting velocity is modeled as the liquid radial flow velocity (Ur) at the air/liquid interface and is approximated

by the following expression Eq.1

w is the substrate rotational speed, r is the radial distance from the wafer center, h is the thickness of the liquid film which is a function of the liquid volumetric flow rate (Q), and ν is the kinematic viscosity. An empirically corrected film thickness expression can be found in ref. [2]. The force balance that takes place on the dewetting front is illustrated in Fig.1. The dewetting driving energy, ED, is given by Eq.2

where gL is the liquid surface tension, gSL the solid/liquid interfacial energy, gSo the dry solid surface energy, r the mass density of the liquid, g the gravitational acceleration, and Ud the dewetting velocity. It can be shown that the ratio between the wetting and dewetting velocities is given by Eq.3

where hc is the critical dewetting thickness which is a function of the contact angle and the capillary length. A dynamical balance between wetting and dewetting is reached when these two velocities equal to each other thus defining the minimum flow rate required to maintain a wetted surface. The model predicted minimum wetting flow rate as a function of the contact angle calculated at various rotational speeds is shown in Fig. 2

As examples to demonstrate the validity of Fig. 2, 30~40 degree contact angle surfaces were prepared by stripping the native oxide from Si substrates and re-growing chemical oxide using H2O2. Figure 3a shows severe de-wetting at a process condition of 0.1 LPM (Litter Per Minute) and 500 rpm This behavior is expected based on the model results of Fig. 2. The condition of 0.5 LPM and 500 RPM (Fie. 3b) resulted in almost all the surface covered with minor edge de-wetting. This is also consistent to the model result. Dewetting on patterned wafers will also be discussed in this paper.

A model has been developed to predict dewetting on single wafer spin processes. Good correlations between model and experimental results were obtained. Leveraging this model is useful for lowering process flow rates on various surface conditions. For example, in the case of a hydrophilic surface, a low flow rate of 0.5 LPM process can be applied which would provide significant cost savings in comparison to the nominal flow rate 1.5 LPM. Eq.3 also gives a numeric guideline on the relative importance of flow rates versus rotation speeds, surface tension, etc. 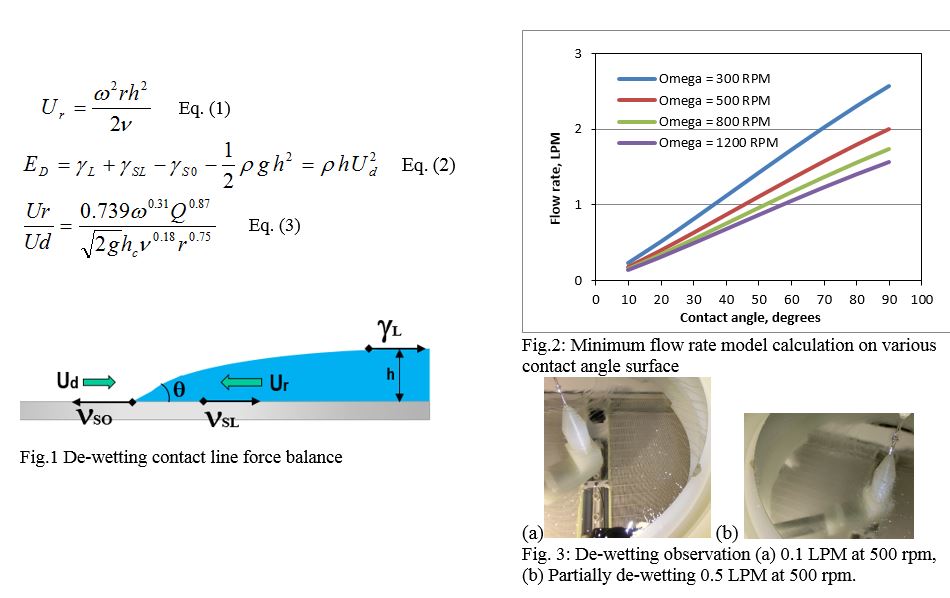