In this study, ultrathin TaN and ternary Ta1-xAlxNy films (denoted TaAlN) were deposited by ALD using metallorganic precursors and were evaluated for their effectiveness in Cu diffusion barrier applications compared to a PVD grown TaN control. TaN was deposited using tert-butylimido tris(ethylmethylamido)tantalum (TBTEMT, Ta(NCMe3)(NEtMe)3) and NH3 at 350 °C with a growth per cycle (GPC) of ~ 0.7 Å/cycle. ALD TaAlN ternary alloy films were deposited by addition of trimethylaluminum/NH3 cycles to the TBTEMT/NH3cycles using Ta:Al cycle ratios in the range 16:1 to 2:1, resulting in Al/(Al+Ta)% in the range of 21% to 88%.

The effectiveness of the barrier layers against Cu-diffusion in advanced interconnects were investigated using in-situ ramp anneal synchrotron x-ray diffraction (XRD) [6,7] to study the effect of annealing on Cu diffusion with the presence of these ultrathin (~1.8 nm) barrier layers interposed between 50 nm PVD grown Cu and the Si substrate. The barrier failure temperature (Tc) was determined based on the onset of Cu3Si XRD peaks during the in-situ ramp anneal. The kinetics of Cu3Si formation was assessed by XRD using multiple ramp anneal rates and performing a Kissinger-like analysis [6] to determine the effective activation energy (Ea) for silicidation in presence of the Cu diffusion barrier layers. Compared to the film stack with PVD TaN barrier, the stacks with ALD TaN and TaAlN (Ta:Al = 8:1) exhibit a slightly higher Tc for Cu silicidation. The effective activation energy of Cu3Si formation for stacks with ALD TaN (Ea ~ 1.5 eV) and TaAlN (Ea ~ 1.3 eV) are close to the reported value for grain boundary diffusion of Cu (1.3 eV) [8], whereas the Cu3Si effective activation energy for the stack with PVD TaN (Ea ~ 2.3 eV) is closer to the reported value for lattice diffusion (2.7 eV).[8] Although the temperature of Cu3Si crystallization and corresponding barrier failure temperature is higher for these ALD barrier films compared to the PVD barrier TaN film, the failure mechanism for the ALD barriers is most likely dominated by grain boundary diffusion whereas the initial failure mechanism for the PVD barrier may be dominated by lattice diffusion. 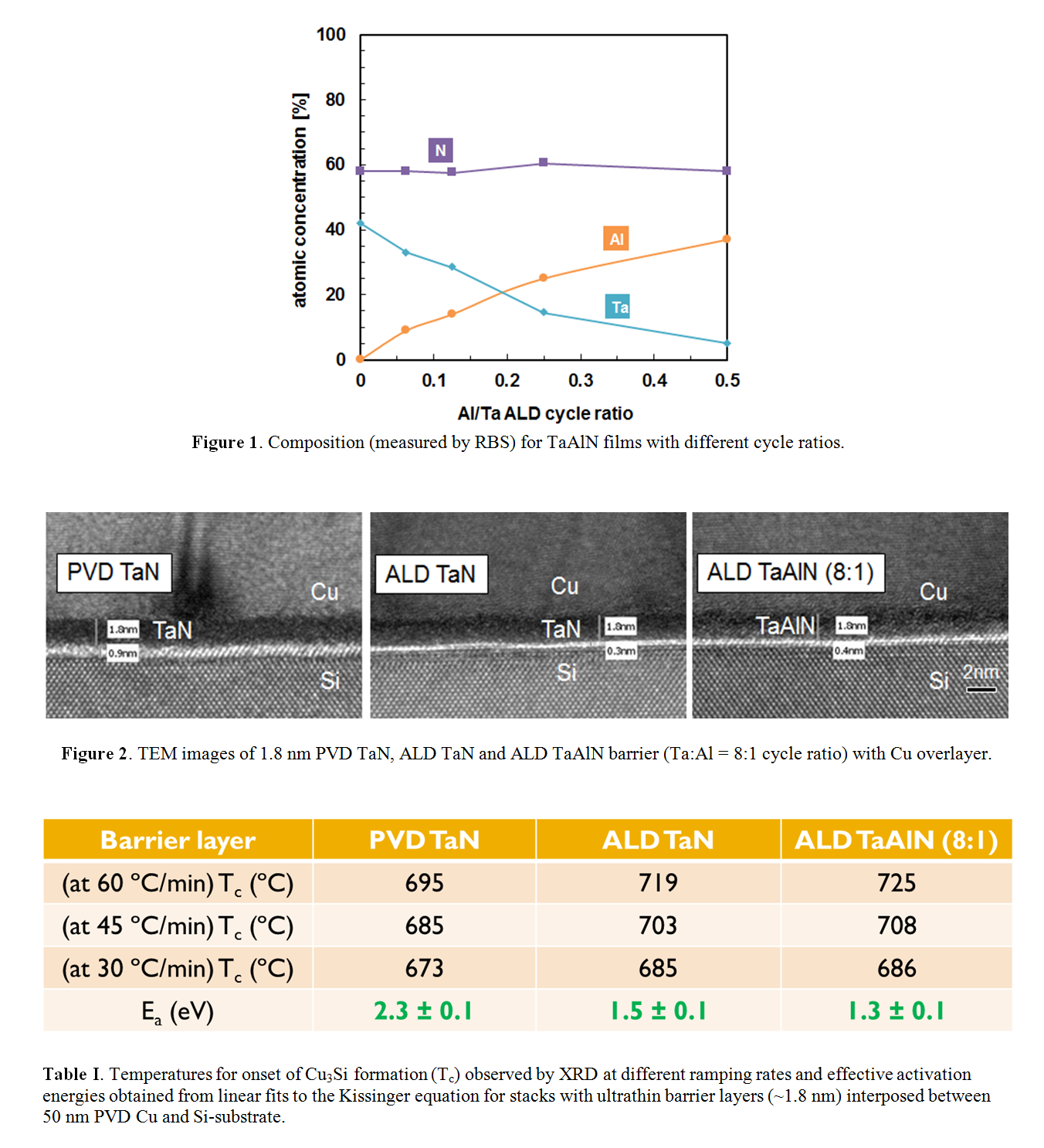