998
(Invited) Metallic Nanocoatings on Optical Fibers as a Sensor Platform

By printing a FBG into the core of an optical fibre, light “modes" that were confined to the core can be directed to the cladding interface. These light modes can then sense changes in this interface, and these changes can be read if the light is directed back into the core. Depositing nanoparticulate films onto the cladding surface alters the effect on these cladding modes. They undergo a wavelength shift and a "peak-to-peak" amplitude change that is significantly different than is seen in uncoated fibres. We have been exploring the deposition of copper, silver, and gold metal films on optical fibre surfaces and investigating the changes in the light modes.

The changes in the light modes that interact at the fibre metal interface are sensitive to the surrounding index of refraction. So, by using a high-permittivity dielectric material between the fibre and the metal coating, the sensitivity can be changed.

This presentation will cover an overview of the chemistry of the precursor compounds for thin film deposition, the film deposition processes, and an interpretation of the resulting sensing ability of the cladding light modes. The wavelength shift is stronger when the device experiences a higher surrounding refractive index (SRI). This happens at low thicknesses, and can be exploited as an SRI detector. Interestingly, there is a significant difference in the spectra for a monolayer of discrete nanoparticles compared to a connected metallic film, also making these devices useful for detecting conductive film deposition. 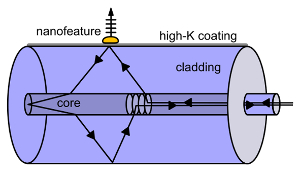