1052
Dissolution of Germanium in Sulfuric Acid Based Solutions

The usage of germanium has recently been considered for the MOSFET channel in order to improve the performance of the integrated semiconductor devices.

Since Ge is oxidized easily and dissolves in to the wet solution, much attention is required for wet cleaning process with minimal dissolution of Ge.

The present study covers the mechanism of Ge dissolution in sulfuric acid based solution in view of different application as the selective NiPt-etch during germanidation and the IIPR strip from Ge.

80nm Ge layers were epitaxially grown on 300mm Si wafers. These wafers were cut into coupons for following tests to determine the Ge loss in sulfuric acid based solutions. All tests were performed in a beaker at 30 degrees C and the amount of each solution was 50ml.

Coupons were immersed in the sulfuric acid based solutions, 30 to 98 wt% sulfuric acid with and without 5g/L of an oxidizer. The oxidizer used in the study is peroxosulfuric acid generated by Electrolyzing Sulfuric Acid, and is referred hereinafter to ESA.

The dissolution of the Ge in the sulfuric acid solution was assessed by ICP-MS (Inductively Coupled Plasma-Mass Spectrometry), and it allowed us to calculate the dissolved volume and dissolution rate.

In order to study the dissolution mechanism in the sulfuric acid based solutions, the surface of the coupon was examined with XPS (X-ray Photoelectron Spectroscopy) before and after immersion to 30wt% sulfuric acid solution and 2wt% hydrogen peroxide solution. The solutions were subjected to ICP-MS after immersion and the results were compared with the XPS data.

Results of XPS analysis conducted on the original surface before immersion as shown in Figure 2. Peaks for Ge, GeO and GeO2 are apparent. When the coupons were immersed in the sulfuric acid, the XPS determinate that no GeO2 is present and only Ge and GeO are remained. When immersed in the hydrogen peroxide solution, both Ge and GeO peaks are detected but GeO peak is much weaker than that with sulfuric acid. No GeO2 is present in either condition. Additionally, a significant increase in dissolution is observed when the Ge coupon was immersed in hydrogen peroxide solution.

These results indicate that GeO2dissolves readily in all solutions tested, and that GeO does not serve as a strong passive film during dissolution, and that active dissolution of Ge requires both water and oxidizer. Proposed dissolution reaction is:

Considering the peaks of the original surface and the effect of UPW and sulfuric acid above mentioned, the foremost surface is GeO2as shown in Figure 3.

Conclusions drawn from the present study are as follows;

oxidizer is present in its solution.

2) The surface of Ge consists of three layers, i.e. GeO2, GeO and and Ge with the

3) Only GeO2 dissolves in solutions without oxidizer, but Ge readily dissolves only when

it is present in the solution.

The ultimate goal of the present study is to enable either the selective etch of the both NiPt-etch during germanidation or strip IIPR from Ge without germanide or Ge dissolution. When Ge is treated with sulfuric acid including an oxidizer, as shown Figure 1, the higher sulfuric acid concentration is, the less Ge dissolution rate is.

This result indicates that it is important to keep sulfuric acid concentration as high as possible when sulfuric acid with oxidizer is applied for Ge wet cleaning process. 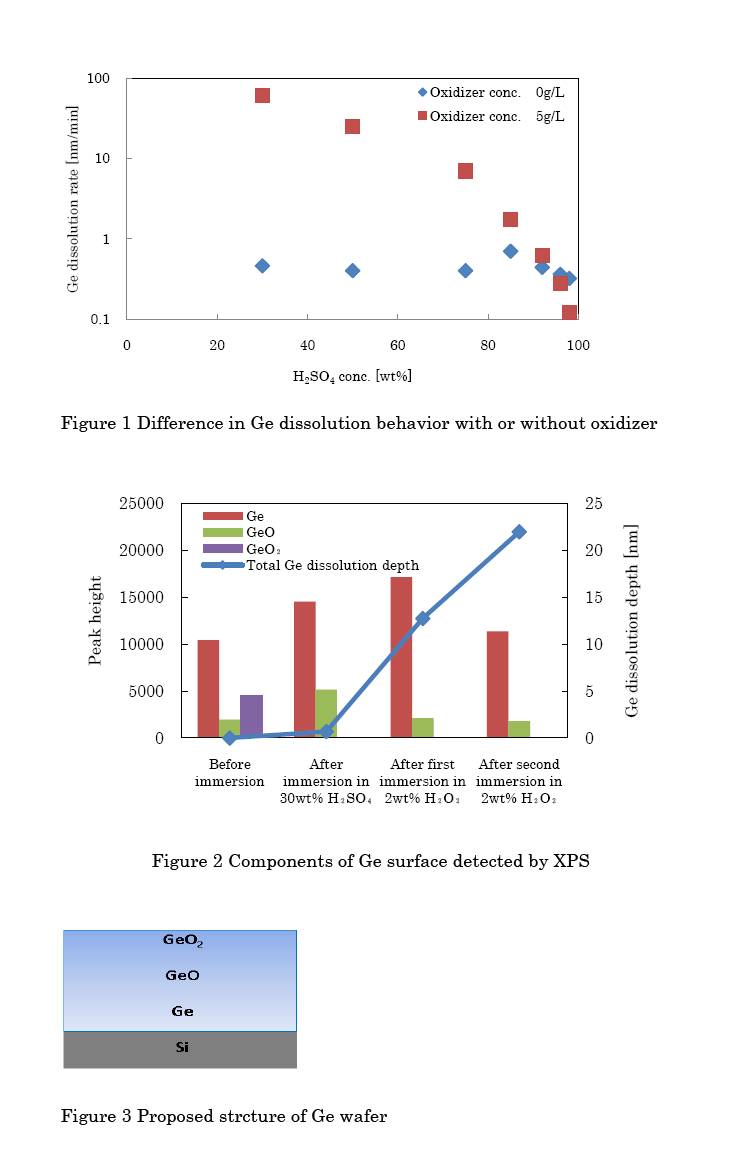