Chemical wet treatment is one of the methods which seem promising to satisfy these criteria on air‑aged wafers. Our intent is to find chemical treatments able to remove native oxide of air-aged GaAs wafers without altering surface morphology.

For this purpose, pieces cut from one AXT (100) substrate of two months air-aged GaAs Zn-doped were dipped in four different solutions for oxide removal: HF 0.5M and HCl 1M for 1 min, NH4OH 1M and (NH4)2S 3.7M for 10 min. The oxide comportment in water with cleanroom light exposure was also studied using recirculated UPW with high N2 bubbling (RUPW). All samples were dried by N2 blow without rinsing and introduced in XPS chamber with less than 5 min of clean room air exposure.

The chemical content of the surface is measured by X-Ray Photoelectron Spectroscopy (XPS) of Ga and As 2p and 3d photoelectron lines with a take-off angle of 45°. Surface morphology of twin samples is acquired by Atomic Force Microscopy (AFM).

The effective oxide removal efficiency of our chemistries without rinsing can be read in Table 1 where less than 10% of initial oxide remains in the worst case. The initial quantity of Ga contained in the analyzed depth is drastically reduced for both acidic treatments as shown by [Ga+Ga‑X]/[As+As‑X] (sum of areas of respective 2p Ga and As deconvolved signals).

Surprisingly, we observed an enrichment in As species with a higher binding energy (As-X) than As-Ga with both basic treatments while Ga-X and As-X species remain stoichiometric for acidic treatments (Figure 1a and 1b). This increase is accorded to specific S-passivation on As atoms in the case of (NH4)2S and to formation of reduced As with ammonia treatment.

Surface roughness obtained after these treatments are resumed in Table 2. Except for the case of HF treated surface where 20 nm height peaks appear (Figure 2), surfaces remain flat. However, basic treatment lead to a smoothing of the surface. This phenomena is accorded to the passivation effect of both basic treatments.

From these observations, each tested chemistry was able to remove the native oxide without deleterious effect on surface roughness except HF treatment. The rinsing step is however not included and the obtained surfaces cannot be considered as those of end-process.

First results show the validity of purposed RUPW rinsing step. The native oxide was exposed to RUPW during 30 min. The initial quantity of oxide is reduced (Table 1) demonstrating a higher rate for oxide dissolution than an eventual oxide formation. A small enrichment in As can be observed as mentioned by Hirota [1]. 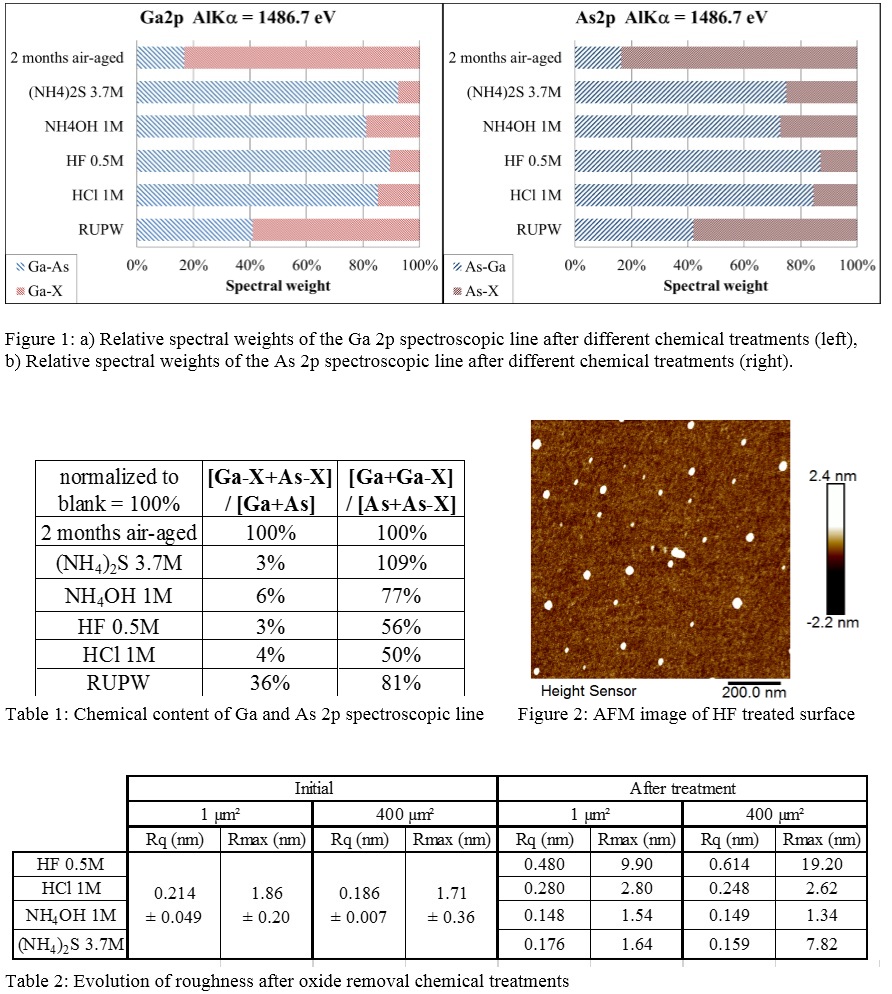