1047
Nanoscale Etching: Dissolution of III-As and Ge in HCl/H2O2 Solutions

Wet-chemical etching for surface and interface processing has proven to be effective for reducing defectivity. Due to the aggressive downscaling of transistors an ultimate etching selectivity and control at the nanometer and atomic-layer scale is required. Therefore, a thorough understanding of the interactions between the substrate and the solution (both chemical and electrochemical) is essential.

In this work the etching kinetics of (100) III-As are discussed for various HCl/H2O2 compositions in the low pH range. The etch rates were determined by measuring the total amount of dissolved material with Inductively Coupled Plasma – Mass Spectrometry [4]. Electrochemical impedance measurements were performed to determine the band energetics of InGaAs during etching for various HCl/H2O2compositions.

III-As can be etched in HCl solution in the presence of an oxidizing agent. In a first step the surface bonds are oxidized by H2O2. The formed III-As (hydr)oxides are  subsequently dissolved by the acid. Fig. 1 shows the influence of the HCl concentration on the etch rate for InGaAs in 0.02 M H2O2 solution. For <0.01M HCl the oxide solubility controls the etch rate. For >0.01M HCl the dissolution kinetics are controlled by the wetting properties (i.e. surface termination): the etch rate decreases with increasing hydrophobicity. It was demonstrated that this is due to Cl-termination. The trend is comparable for GaAs and InAs [5, 6]. Electrochemical impedance measurements for InGaAs suggest that Cl termination results in a significant shift in flat-band potential (EFB) as shown in Fig. 1. The observed change in the band energetics has an important consequence for the dissolution mechanism of InGaAs. It can be shown that the mechanism for 0.01M HCl is both chemical and electrochemical, while for 1M HCl dissolution is mainly chemical. Such insight can, for instance, be used to influence the surface stoichiometry: suppressing the electrochemical mechanism lowers the build-up of elemental As0:

Fig. 2 shows the etch rate of Ge (100) as function of the H2O2 concentration for 1M and 6M HCl. Interestingly, the etching kinetics for Ge are also strongly influenced by the wetting properties. For 1M HCl, the surface ishydrophilic and the etch rate increases from <0.1 nm/min to 21 nm/min in the range 0-50 mM H2O2. When the HCl concentration is increased to 6M, the surface becomes hydrophobic and the etch rate is lowered. These results suggests that Cl-termination is also important for the dissolution mechanism of Ge. Due to the low solubility of Ge suboxides [7], higher HCl concentrations are required to render the surface hydrophobic during etching. 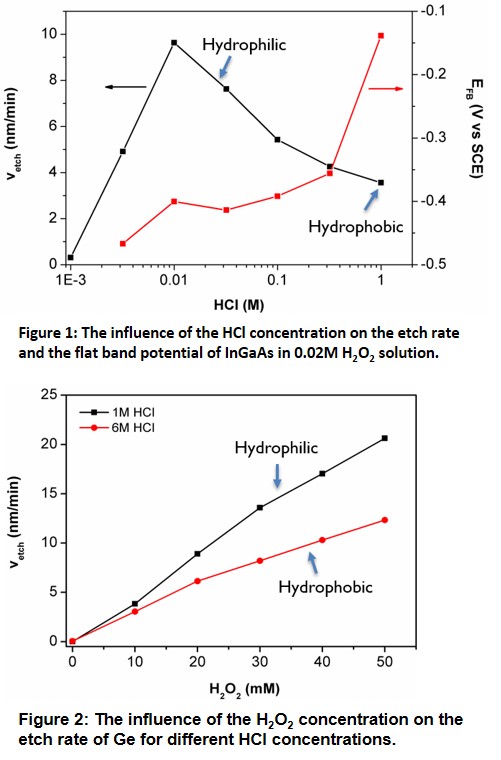