Grand Salon B - Section 9 (Hilton New Orleans Riverside)
A. Kumar, D. Atienza (Nissan Technical Center North America), V. K. Ramani (Washington University in St. Louis), and N. Dale (Nissan Technical Center North America)
The PEFC cathode can degrade during start-stop operation via carbon corrosion (1). To prevent cathode degradation, a voltage limiting control (VLC) protocol can be one of the effective measures to protect the cathode during cell start-up and shut-down (2). The VLC can, however, lead to voltage spikes (high positive potentials) at the anode during fuel cell start-up and shut-down. Moreover, during fuel (H2) starvation conditions, the potential at the anode can give rise to high positive potentials leading to carbon corrosion and, subsequently, anode catalyst layer degradation. To avoid degradation of the anode catalyst layer during start-up and shut-down with imposed VLC and/or during fuel starvation, a mixed oxide of ruthenium oxide-titanium oxide (RTO) was investigated as a suitable corrosion-resistant replacement for carbon in the anode catalyst. RTO has previously been demonstrated to be an excellent corrosion-resistant support material at the PEFC cathode (3). In this study, 40% Pt/RTO was used as the anode catalyst in a fuel cell and its durability was measured under cell reversal conditions using a protocol designed to simulate high voltage spikes at the anode. The reverse cell potential for the baseline TKK TEC10EA30E reached -2.0 V (MEA failure criteria) well before the target of 200 cycles. The reverse cell potential for the 40% Pt/RTO anode remained steady even after 400 cycles of the cell reversal protocol, indicating higher H2 starvation tolerance for 40% Pt/RTO compared to the baseline TKK TEC10EA30E (Pt/Graphitized Ketjen Black) catalyst, as shown in Figure 1. The reverse cell potential for 40% Pt/RTO did not reach -2.0 V (MEA failure criteria) even after 400 cycles. The high retention in durability of Pt/RTO catalyst compared to TEC10EA30E was attributed to the avoidance of support-corrosion-induced loss and to the excellent activity of RuO2, present in RTO, for the oxygen evolution reaction (OER).

From the hydrogen oxidation reaction (HOR) study, the polarization resistance (Rp) of 40% Pt/RTO was found to be higher than that of TEC10EA30E (36.6 mOhm-cm2 compared to 23.9 mOhm-cm2) indicating lower initial HOR activity of 40% Pt/RTO. However, the Rp for HOR of TEC10EA30E increased to 6.6x its initial value after cell reversal cycling, indicating severe degradation of the catalyst layer. The Rp of the 40% Pt/RTO increased to only 1.4x its initial value after cell reversal cycling, which supported the conclusion made earlier that the anode made from 40% Pt/RTO catalyst was considerably more durable than the anode made out of baseline Pt/GKB catalyst. Using limiting current experiments, H2 gas transport resistances were measured in the anode catalyst layer and the resistances: Rdiff (due to diffusion resistance of H2 in the GDL and flow fields) and Rother (arising primarily from H2 gas diffusion in the catalyst layer) resistance values were calculated (4). Rdiff (at 101.3 kPaabs) was found to increase 10 fold for TEC10EA30E anode after durability cycling compared to a 1.3x increase for the 40% Pt/RTO anode. This indicated that the anode GDL could also have corroded under the cell reversal protocol. After durability cycling, the Rother resistance for baseline TEC10EA30E increased by a factor of 12 when compared to 40% Pt/RTO, which retained a relatively constant Rotherdue to its excellent corrosion resistance.

The authors would like to gratefully acknowledge Guanxiong Wang for synthesizing the catalyst supports and catalysts used in this study and Dr. Ellazar Niangar for research design and planning and helpful discussions. 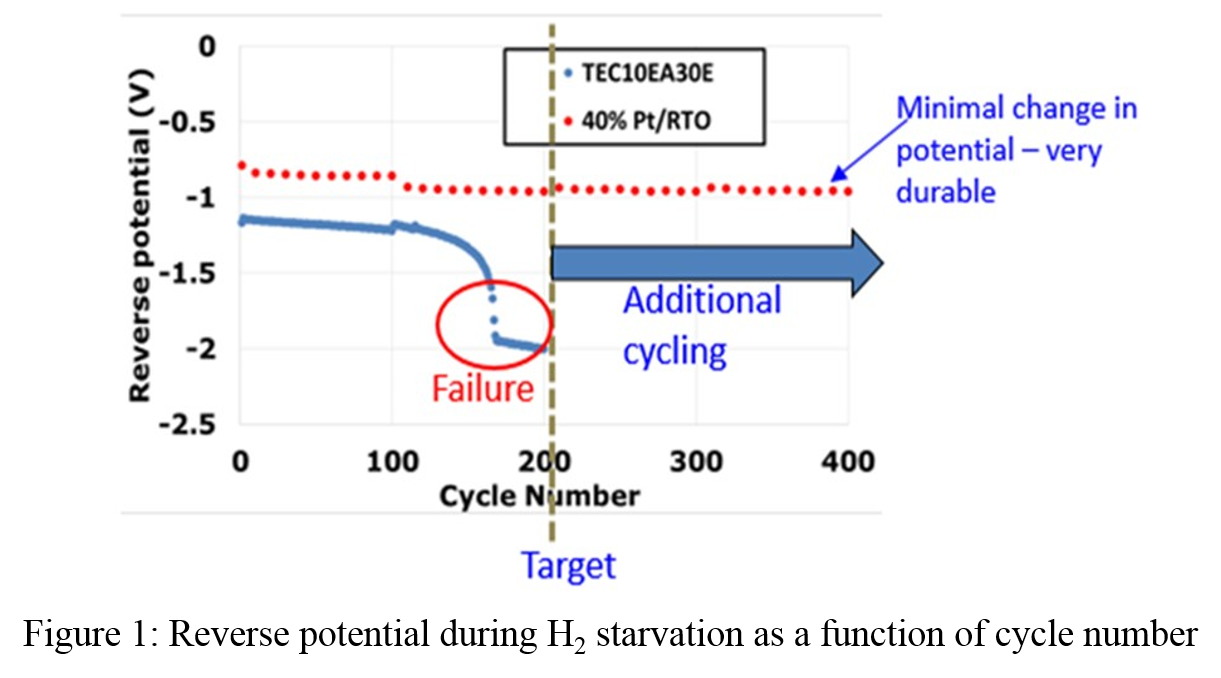