1264
Incorporation of the Organic Additives during the Damascene or TSV Process: Influence of the Applied Waveform

Churchill B2 (Hilton New Orleans Riverside)
E. Delbos (Institut Lavoisier de Versailles, KMG Ultra Pure Chemicals), F. Jomard (GEMAC), M. Bouttemy, and A. Etcheberry (Institut Lavoisier de Versailles)
The today increase demand for high-performance microelectronic products requires new reliable interconnection metallization for microelectronic packaging. Copper electroplating is a cost-effective technology, mainly adopted to manufacture interconnects in integrated semiconductor devices [1-3]. In copper 3D interconnections, Damascene or Through Silicon Via (TSV) technologies; numerous factors have an influence on the filling and microstructural results, as the copper bath composition, the applied current density and waveform, the plating cell hydrodynamics…, conditioning the final resistivity of the copper layer. These parameters must be more and more optimised to achieve the filling of a large challenging range via dimensions and very aggressive aspect–ratio. Nevertheless whatever the design of the vias, the substrate composition, the plating cell and other parameters, the free-defect filling of interconnections is obtained only by bottom-up mechanism, where the copper deposition is promoted by superfilling effect and limited on the top, thanks to the addition of two or three organic additives. Without organic additives, only conformal or sub-conformal platings can be grown, causing voids, defects, lack of adherence and poor compactness. The superfilling mechanisms, depending on the additive composition, their relative concentration and the competition between them, are well described and simulated by the curvature-enhanced acceleration accumulation (CEAC) mechanism [4]. Determined first from steady-state measurements, this model permit to predict the evolution of via filling by copper [5], with no information concerning additives incorporation or signature throughout this layer. Indeed, the use of additives introduces also impurities and additives breakdown products during the copper growing. These contaminating agents create defects during the crystallisation like vacancies or dilatation sites of dislocation and limit grain boundary motion and growth during the self-annealing of the copper layer. These phenomena are well deal in the works of Koh et al. [6], and Stangl et al. [7] and particularly well observed with the use of aged bathes. Strangl et al. [7] have demonstrated the incorporation differences between a regular plated copper film and a pulse plated. Favry et al. [5] have also investigated the organic adsorption and inclusion during the copper growing as a function of the additive concentrations or current density. By the combination of electrochemical measurements and SIMS analysis, they have proved an increase of organic inclusion during a regime modification in the plating process.

In this present research work, the influence of the applied waveform on the organic additives incorporations is discussed. The work focuses on the organic trace analyses by complementary analysis methods: XPS and SIMS. Firstly, XPS for X-ray photoelectron spectroscopy is a surface (10 nm) sensitive quantitative technique. The resulting spectrum allows the determination of the elementary and chemical composition of the analysed material and the concentration of the different detected elements. The XPS sensitivity is around 0.1 at.%, allowing a chemical cartography of the sample surface composition just after the bath extraction, with the determination of additive adsorptions during an OCP time. Then thanks to an ionic abrasion during the acquisition, a depth analysis is possible, profiling the elements concentration in the bulk material and not only on the surface. Secondly, based on heavy ions bombardment, SIMS for secondary ion mass spectrometry allows a surface composition analysis by sputtering, collecting and mass analysing of ejected secondary ions. This destructive method enables the determination of the elemental, isotopic and molecular composition of a surface or a bulk. The SIMS sensitivity is around 10-4 and 1 at%, but the quantitative analyse is limited.

After electrochemical considerations concerning the influence of applied current density waveforms, this research work presents a comparative study of organic incorporations by XPS and SIMS analyses for different copper layers, taking into account the applied waveforms and the bath composition. 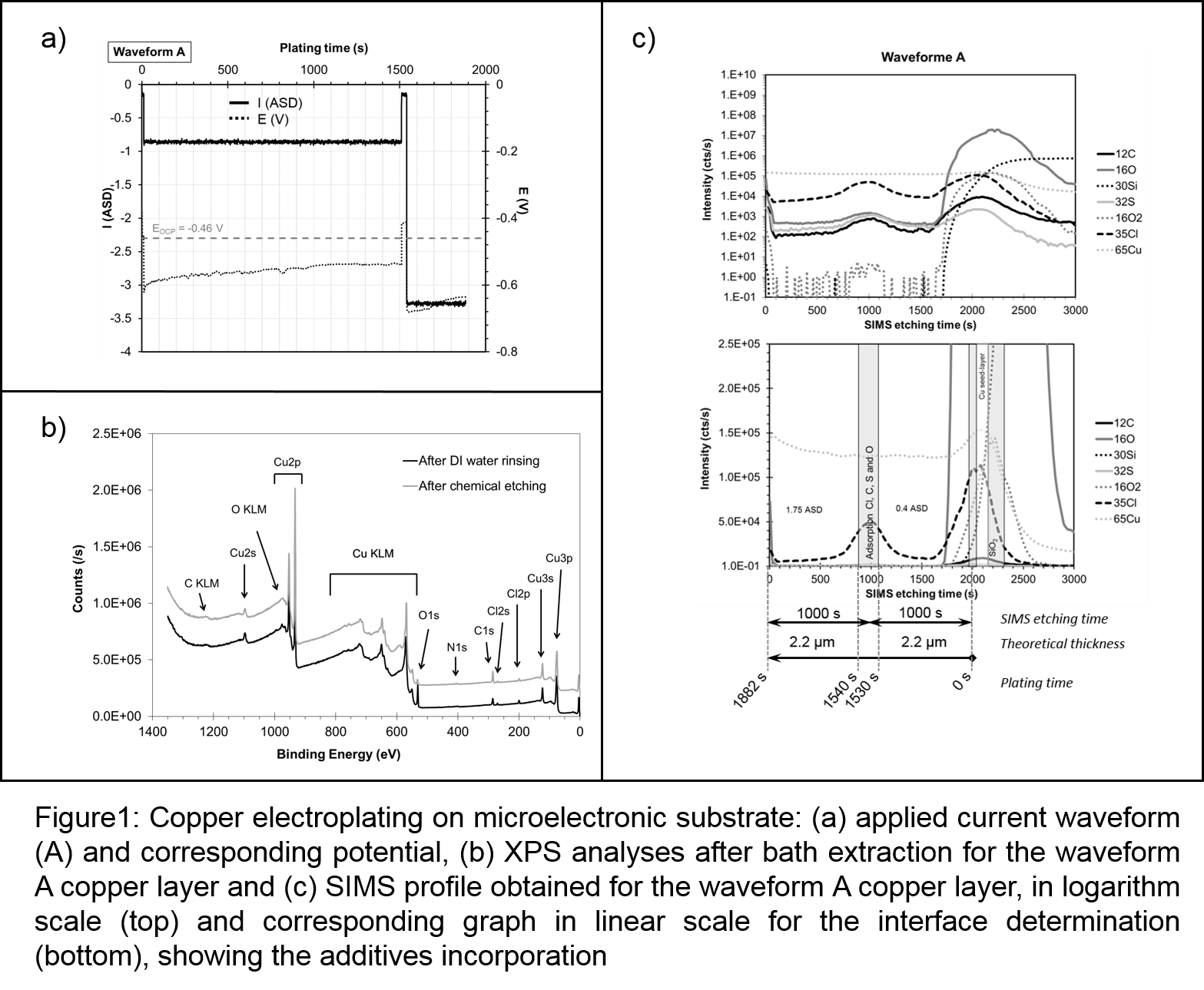