In this study, we show how second-harmonic generation (SHG) and two-photon-excited photoluminescence (2PPL) imaging techniques are powerful tools for 3D analysis of extended defects in 4H-SiC epilayers [5, 6]. The SHG and 2PPL methods can be performed by a multi-photon microscope in individual laboratories. The SHG method provides clear 3D images of 3C-inclusions because 3C-SiC is SHG-active, but not 4H-SiC host crystal in c-axis incidence (Fig. 1). The 2PPL method yields 3D images; not only of 3C-inclusions but also 8H stacking faults (Fig. 2), and single Shockley stacking faults in the epilayers.

The 2PPL method also achieved 3D imaging of TSDs, TEDs, and BPDs using band-edge emission [7]. Since band-edge emission quenches near defects, these dislocations can be visualized as dark contrasts on a bright background. We obtained 3D images of TSDs and TEDs extending ~200 μm from the surface (Fig. 3). Unlike 2D PL imaging with uniform illumination, the dark-contrast imaging is governed by the diffusion and transport of excess carriers injected from a scanning focal point. A simulation study was conducted to reveal the mechanism of the dark-contrast imaging.

The results of the tilt-angle analyses cannot be explained by the energy minimization model in bulk materials. We consider that the directions of TEDs and TSDs depend upon the interactions between dislocations and advancing steps on a growing surface. 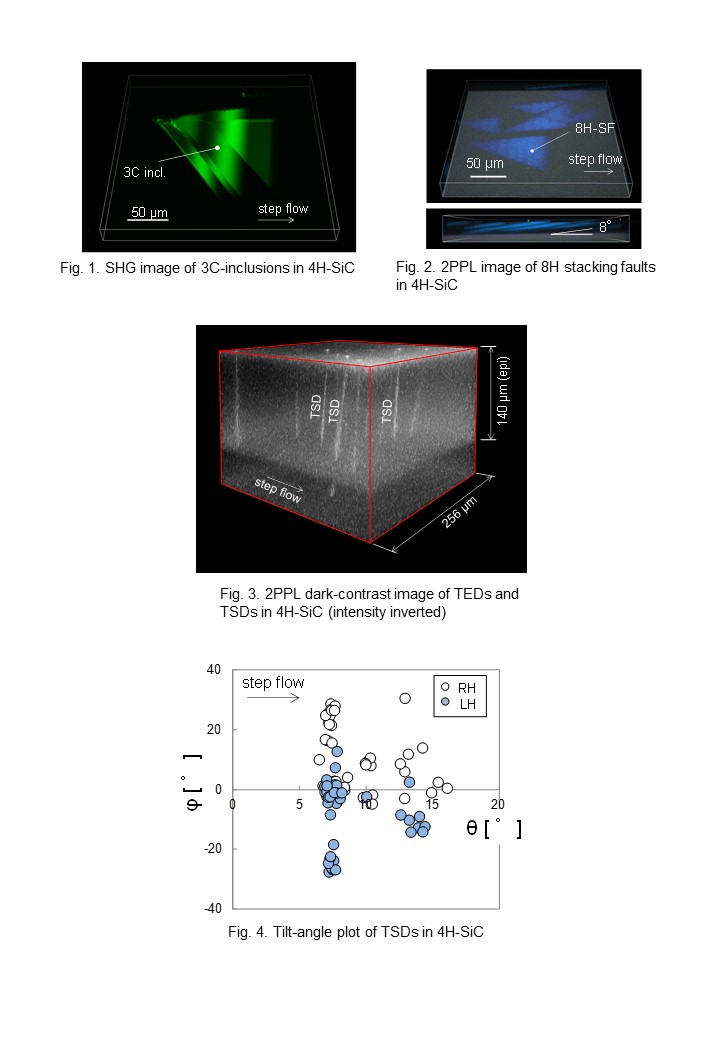