In order to prevent pattern collapse, various drying technologies have been developed, such as isopropyl alcohol(IPA) dry, sublimation dry, supercritical dry, and surface modification agent treatment dry. It is important to fully understand the pattern collapse prevention performance of each drying technology in order to promptly determine a sustainable solution. In general, space aspect ratio (space AR), which consists of two parameters, pattern height and space, is often used as the indicator for determining the likelihood of pattern collapse occurrence, because high aspect ratio structures tend to collapse more easily. However, pattern collapse is also influenced by flexural rigidity of the structures, pattern thickness, material, and shape. Therefore, space AR lacks versatility in comparing different structures.

We propose “GammaPC” as the new parameter for pattern collapse occurrence. In this paper, we indicate with experimental data that GammaPC can be used to accurately assess the pattern collapse prevention performance of drying technologies.

Two structure models, line and pillar, with rinse liquid present in one of the grooves are considered (Figure1). The patterns are subjected to the uniformly distributed load P caused by Laplace Pressure over the span L. The deflection delta of patterns is given as Equation1 where E is Young modulus, I is moment of inertia of area, t is thickness and W is width. The distributed load P is given as Equation2 where S is space, gamma  is surface tension of rinse liquid, theta is contact angle(theta is set to 0 in this paper). Equation1 is rearranged about gamma with Equation2 and delta=S/2. As a result, Equation3 is obtained and we define the surface tension on this condition as GammaPC (Gamma Pattern Contact)

When the deflection delta is equal to half of space (S/2), the walls of the groove collapse in and make contact. Therefore, GammaPC means the threshold of pattern collapse occurrence. Structures with small GammaPC collapse easily with minimal force. Structures with large GammaPC are less likely to collapse. GammaPC gives us approximate information about the mechanical strength of structures.

We prepared four 90nm pitch pillar patterned samples of silicon (E=130GPa) with heights ranging from 380nm to 455nm, and four 40nm pitch line patterned samples of silicon oxide (E=75GPa) with heights ranging from 250nm to 330nm. At first, the height and width of the pattern were measured by scatterometory, and space AR and GammaPC were calculated. Next, we tested three drying methods: IPA spin dry; IPA scan dry; and Surface Modification Dry (SMD). Figure 2 shows scatter diagrams of the pattern collapse ratio of space AR and GammaPC. With space AR, the plots are scattered widely, and are divided into two groups by structure pattern. On the other hand, the pattern collapse ratio of GammaPC begins to increase at a certain value of GammaPC with each drying technology. The value of GammaPC indicates the pattern collapse prevention performance. So the structures with a GammaPC value of less than about 4-5 need a dry technology with a higher performance than SMD. Notably, the tendency is almost the same even with different structures. GammaPC can indicate the dry technology performance for pattern collapse occurrence more precisely and quantitatively than space AR. 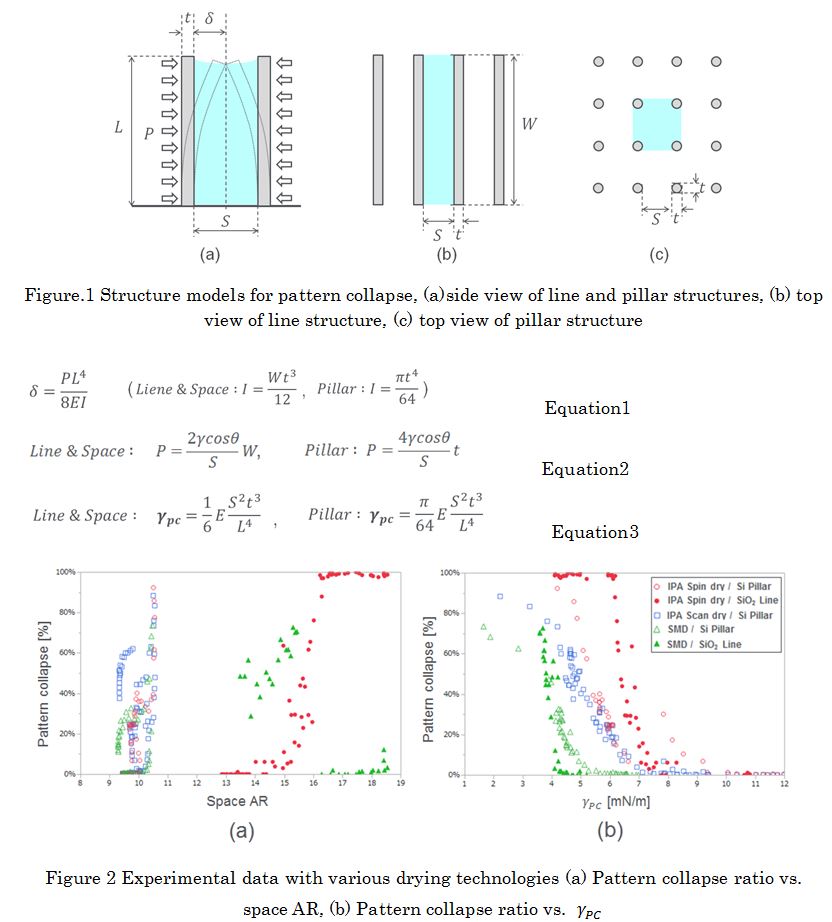