To reduce the capillary forces, a low surface tension liquid such as isopropyl alcohol (IPA) has been used rinsing liquid. Furthermore, zero surface tension with super critical fluid (SCF) is beginning to be employed for semiconductor mass production. To suppress the adhesive forces, we have proposed the surface energy reduction process [6]. Moreover, we have already demonstrated this process is more effective for preventing nano-structure stiction than conventional IPA drying.

The ideal surface termination is to minimize the number of high energy molecule sites. In case of silicon oxide surfaces, it means to replace highly reactive hydroxyl groups with inactive molecules. In this paper, we will present the proper molecular structure for the surface energy reduction agents and its evaluation method.

We used two types of silylation agent for the surface energy reduction. The carbon number of straight-chain alkyl group of the agents is 1 and 8, so named as C1 and C8 respectively. We dipped thermally oxidized Si pieces in these agents, and measured the water contact angles. We also estimated the surface free energy from the critical surface tension obtained by Zisman plot. We treated 15nm half pitch SiO2 high aspect ratio line and space patterns with a single wafer cleaning tool, and checked the presence or absence of its pattern stiction with scanning electron microscopy (SEM).

As shown in Figure 2 Zisman plot, critical surface tension of the C8-treated SiO2 surface is 25 mN/m. Whereas the critical surface tension of the C1-treated surface is 22.5 mN/m in spite of its lower water contact angle than that of C8 treated surface. It is supposed that hydrogen bonds influence should be considered in use of a water probe since hydrogen bonds in water generate higher liquid surface tension. As explained by Cassie-Baxter theory, complex surfaces water pinning effect enhances the apparent water contact angle. Namely, in order to suppress nano-structure stiction,we should reduce the surface free energy at the interface between contacting nano-structures [6]. To obtain the surface free energy, we had to eliminate the influence of hydrogen bonds. So, we have focused a nonpolar hydrocarbon probe used for Zisman plot method which is free from hydrogen bonds influence. Eventually, we have obtained the ideal surface free energy of the nano-structure surface.

Figure 3 shows the SEM images of the 15nm half pitch line and space samples treated with C1 and C8 respectively. The only C1-treated sample shows no stiction. This result indicates that it is not so important to obtain high water repellency, but is very important to obtain lower surface free energy.

We evaluated two types of silylation agent (C1,C8) for suppression of nano-structure stiction. Although C1-treated surface enables lower water contact angle than that of C8, its surface free energy becomes lower. For 15nm half pitch line and space, C8-treatment cannot suppress the line stiction since C8-treatment is insufficient to reduce the surface free energy as C1. We have confirmed that surface free energy reduction is important for the suppression of stiction, and have attained stiction free drying of 15nm half pitch high aspect ratio line & space using C1-treatment. 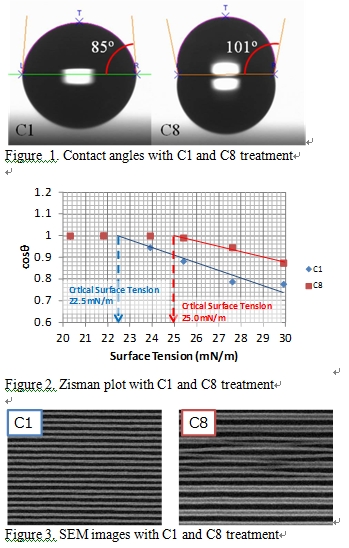