As semiconductor devices become smaller and more highly integrated, it becomes necessary to remove increasingly smaller particles. Currently, various processes such as atomized spray cleaning are being used for particle removal. This method is good for removing larger particles, but it is difficult to remove smaller particles with this kind of process.

During atomized spray cleaning there is a boundary layer at the substrate surface which reduces the shear stress that ultimately provides the force to move particles away from the surface. Similarly, if the carrier gas flow rate is increased in order to get higher particle removal efficiency (PRE), above a certain amount there is the possibility of pattern damage. In the case of chemical cleaning, for example SC1 (ammonia + peroxide) cleaning on Si substrates, there is the concern of film loss due to etching of the substrate as well. In this paper, we propose a new cleaning method for removing smaller particles without pattern damage or film loss.

Solid Phase Clean is a process that uses a polymer to coat the surface of the substrate. The polymer film covers the particles and then directly removes the particles when the film is removed. Furthermore, it does not attack fine patterns and does not etch the substrate material. Figure 1 shows the Solid Phase Clean process. The first step is polymer coating. Particles are covered with the polymer and encapsulated by it. The second step is treatment. The polymer is removed by a treatment liquid, and the particles are removed with the polymer during this step.

Figure 5 shows the cleaning energy model for this process. We considered the interface energies of each of the touching phases: polymer, particle, substrate, and treatment liquid.

If Δ𝐸<0, particles would be removed.

- 𝛾𝑖𝑗: surface energy of interface between phases 𝑖 and 𝑗

-𝜙: fraction of particle surface area that is not touching substrate (0.5<𝜙<1).

- (a) : total surface energy of interface particle is lifted off of substrate

Figure 6 shows the calculation of the interface energy. As this figure shows that −Δ𝐸 is over 0, it predicts that particles will be removed.

Solid Phase Clean is a new cleaning technology that allows removal of smaller particles. By using a polymer to coat the substrate and particles, the polymer is able to directly apply force to the particles and remove them. With this process we achieved high particle removal performance without pattern damage or significant etching of the substrate. We also estimate the removal force and developed a model for particle removal performance of this process by use of an interface energy model. 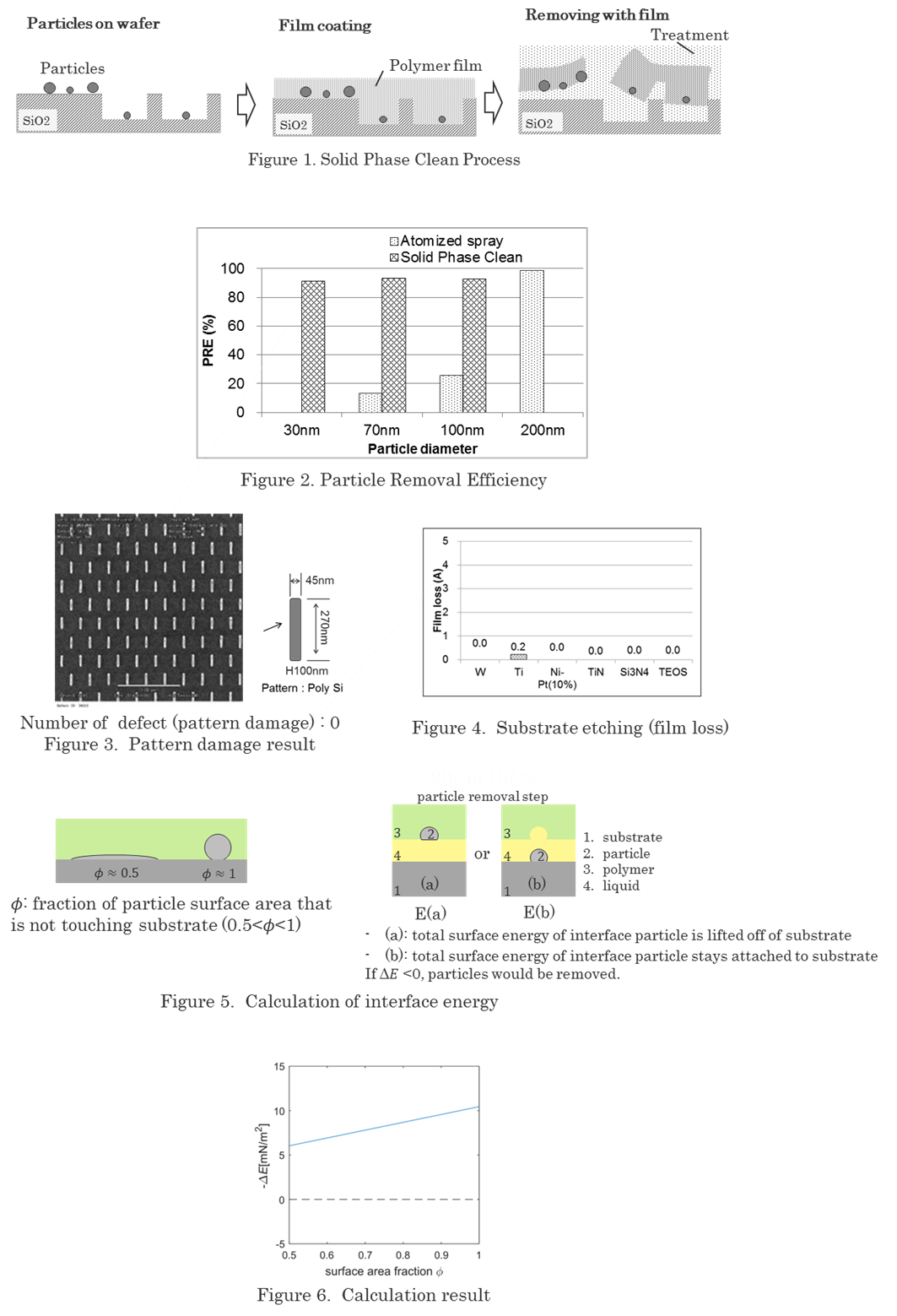