Chesapeake B (Gaylord National Resort and Convention Center)
J. S. Park, J. H. Shim, K. B. Chun, J. E. Lee, T. H. Shim, and J. G. Park (Hanyang University)
In recent years, free-standing gallium nitride (FS-GaN) wafers were researched due to high demand for power device, high brightness LED (HB-LED) and laser diode (LD). The GaN wafers grown by hydride vapor phase epitaxy (HVPE) have been used for the substrate of power device, HB-LED and LD because they demonstrated lower dislocation density (DD) than that of GaN wafers grown by metal-organic chemical vapor deposition (MOCVD). However, they still have residual stress and wafer bow, which lower the device productivity in mass production. To overcome these issues, the control of crystallographic quality and wafer bow are the key technologies. The crystallographic quality of the GaN wafer is mostly determined at the growth process. The bow of the wafer is determined by the difference in thermal expansion coefficient (TEC) between sapphire substrate and GaN, and it can be controlled at the wafering process. In this study, therefore, we investigated how the bow of the FS-GaN wafer is changed during wafering process. In particular, the effect of the abrasive size on the damaged layer thickness during lapping process was investigated and residual stress was calculated theoretically.

Two inch GaN wafers were fabricated on (0001) sapphire substrates by HVPE and separated by the laser lift-off (LLO) process. The bow of as-grown GaN wafer after LLO process was ranged from -300 to -100 um, which was determined by the residual thermal stress. The GaN wafer bow is changed during the wafering process, especially the lapping process. From the Stoney’s formula, it is notable that the thickness of substrate (tS) and sub-surface damaged layer (tSSD) can change the wafer bow.

Fig. 1 shows the wafer bow (black triangle), residual stress (blue square) of experimented GaN wafer and wafer bow calculated by the Stoney’s formula (red triangle). It was confirmed that the wafer bow was reduced as the thickness of GaN wafer reduced. In particular, the bow was inverted from concave to convex at the thickness of around 180 um. As the lapping process progressed, tS is reduced and tSSD is generated, which led to the change of bow to convex.

In our presentation, we report how we achieved zero-bow FS-GaN wafer shown in Fig. 3, and how to control residual stress and optimize wafering process.

* This work was financially supported by the Brain Korea 21 Plus Program in 2017. 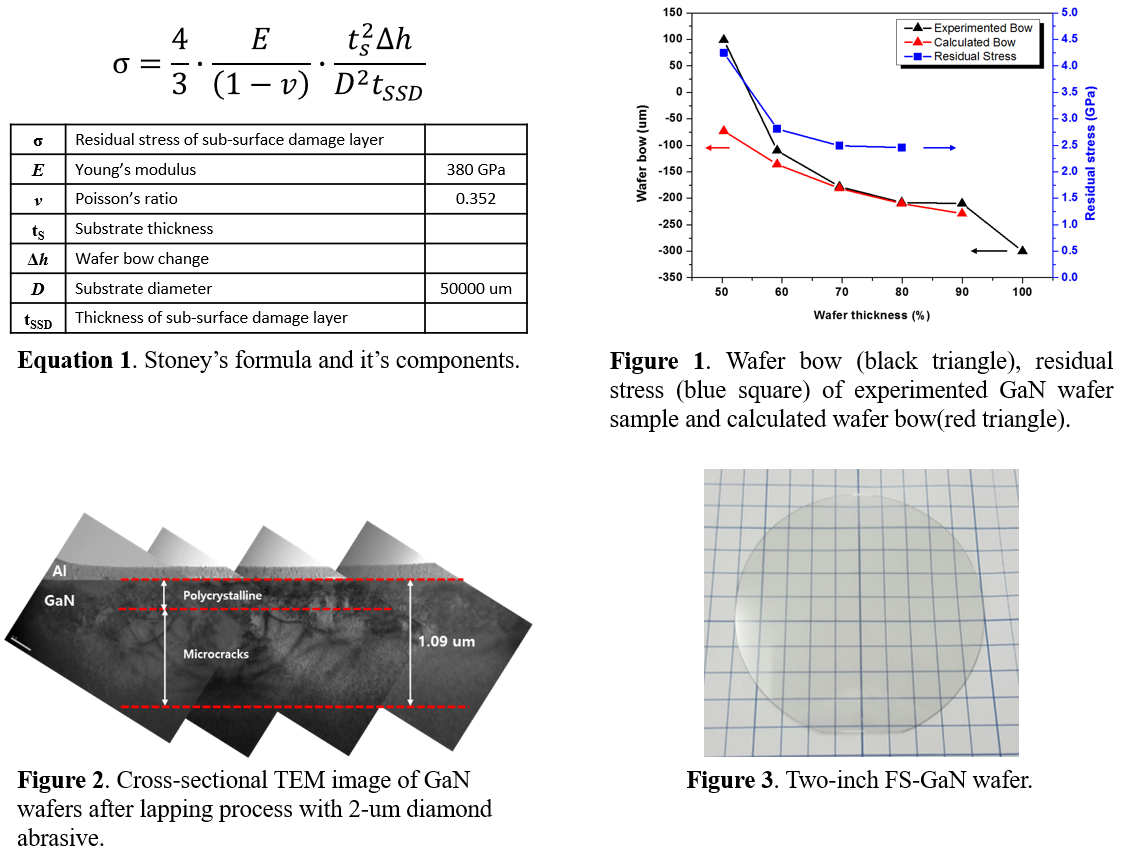