Chesapeake B (Gaylord National Resort and Convention Center)
J. Guo, Y. Yang, B. Raghothamachar, and M. Dudley (Stony Brook University)
Unique and excellent properties of 4H-SiC have rendered a series of successful applications in various energy-related fields such as Electric Vehicle (EV) and Smart Grid. While efforts have been made over decades towards the improvement of crystal quality, the densities of crystalline defects existing in the as-grown crystals are still significant. One of the major issues is the residual stress left by the inhomogeneous distribution of crystal defects, which will lead to lattice bending and lattice strain once the bulk as-grown crystals are sliced into wafers. Therefore, the level of lattice strain and bending equivalently characterizes the level of overall homogeneity of the sliced wafer.

X-ray topography, particularly synchrotron monochromatic X-ray topography (SMBXT), enables a highly strain-sensitive technique for imaging the near surface regions of single crystals. When a strained crystal is illuminated by synchrotron monochromatic radiation, the crystal does not diffract entirely. In fact, only a limited region fulfills the Bragg’s Law and diffracts. In order for other regions to diffract, the wafer has to be rocked through the perfect Bragg’s condition with tiny increments. The variation in diffraction condition can thus be mapped as a function of position, which is caused by local lattice bending and strain. By recording the same map with the opposite diffraction vector, i.e. rotating the wafer about the original diffraction vector by 180 degree, the strain component can be separated with the bending component so that two individual maps of lattice strain and lattice bending, respectively, can be obtained.

In this paper, we use this method to estimate the local lattice strain and lattice bending as a function of position in a 75mm 4H-SiC commercial substrate wafer. Results are compared with X-ray topographic images recorded simultaneously from the same wafer. 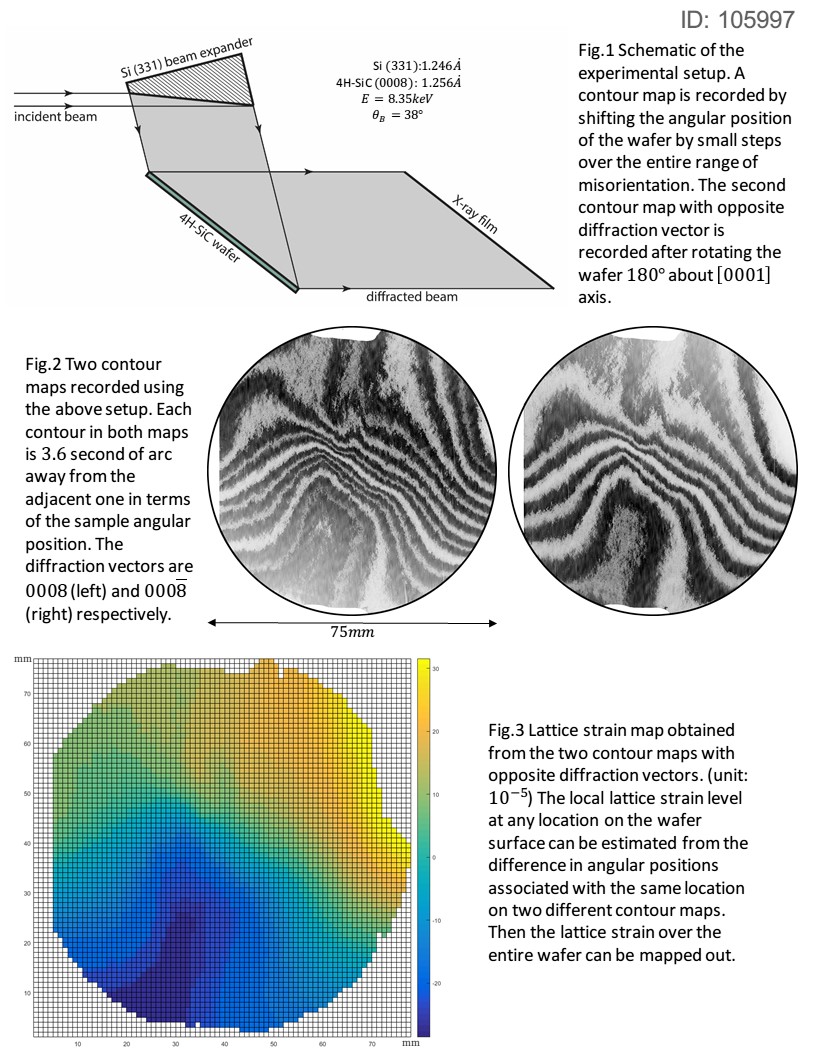