Churchill B2 (Hilton New Orleans Riverside)
G. Dushaq, M. Rasras (Masdar Institute of Science and Technology), and A. Nayfeh (Masdar Institue of Science and Technology, Abu Dhabi, UAE)
Developing efficient, low cost, and long term stable materials is very critical for the next generation of electronic and photonic devices. Germanium with its prominent electrical and optical properties is promising material [1]. From an optical perspective Ge has high index of refraction and low optical dispersion. Furthermore, the hole and electron mobility of bulk Ge are approximately four and two times higher than conventional Si channel, respectively. The need for growing high quality Ge layers at low temperature is critical for Ge based photonic and electronic devices, which gives a high compatibility with most CMOS based semiconductor technology [2]. However, most reported approaches to produce high quality Ge film employ a high substrate temperature. In other reported methods Ge film can be crystalized at low temperature by utilizing a thin layer of suitable metal such as Al and Cu [3]. However, an annealing step at high temperature is still required and the possibility of alloying the Ge and change its properties is very high.

In the last decade, transition from amorphous to microcrystalline and nano-crystaline embedded on amorphous matrix has been observed in a-Si by modifying the deposition condition using RF-PECVD reactor [4]. In this paper, we present a µc-Ge:H embedded in amorphous matrix deposited at 300 ºC using RF-PECVD rector activated by a 13.56MHz RF signal. The correlation between the dilution ratio of H2/GeH4 and the films structural and optical properties has been studied, with special attention to the impact on the optical index of refraction and optical transmission of the produced films. The films are deposited on Corning 1737 glass substrate. A mixture of ultrahigh pure GeH4, H2, and Ar are used as precursor gases. In all cases the chamber pressure is set at 1000mtor, an Ar flow of 100sccm and a power density of 20W are used. The glass substrates are cleaned by rinsing them in Acetone and then in Isopropanol using ultrasonic cleaner for 20min. After this the samples are rinsed with DI water and dried with nitrogen flow. A low germaine flow rate of 0.5sccm is used to form the micro/nanocrystalline germanium and the hydrogen flow rate was varied from zero to 100sccm. The correlation between the hydrogen flow rate, grain size and the crystalline fraction of µc-Ge:H in tuning the optical characteristic of a-Ge:H has been characterized using Raman spectroscopy, variable angle ellipsometerry and UV/VIS/INR spectrophotometer .

It was observed that by incorporating high hydrogen flow rates in the films with low GeH4 concentration, the a-Ge films can be crystalized at 300 ºC. Fig.1a and b show the impact of incorporating different hydrogen flow rates during the film deposition at 0.5sccm of GeH4. All samples present a Raman peak with sharp Ge-Ge TO peak near 300cm-1, which gives evidence of a crystalline contribution. Moreover, hydrogen-induced crystallization of amorphous Ge at very low temperature of 300 ºC is evident in those samples, where incorporating 100sccm of H2 results in 71% crystalline fraction, apart from some amorphous phase still exist in this sample. In addition, by varying the hydrogen flow of µc-Ge:H samples, the index of refraction and the optical transmission of the films can be tuned over broad range of wavelengths spectrum as shown in Fig.1c and d. The changes in the optical index of refraction and transmission characteristic in the produced µc-Ge:H at low deposition temperature of 300 ºC is promising for CMOS compatible photonic application, and solar cell application. 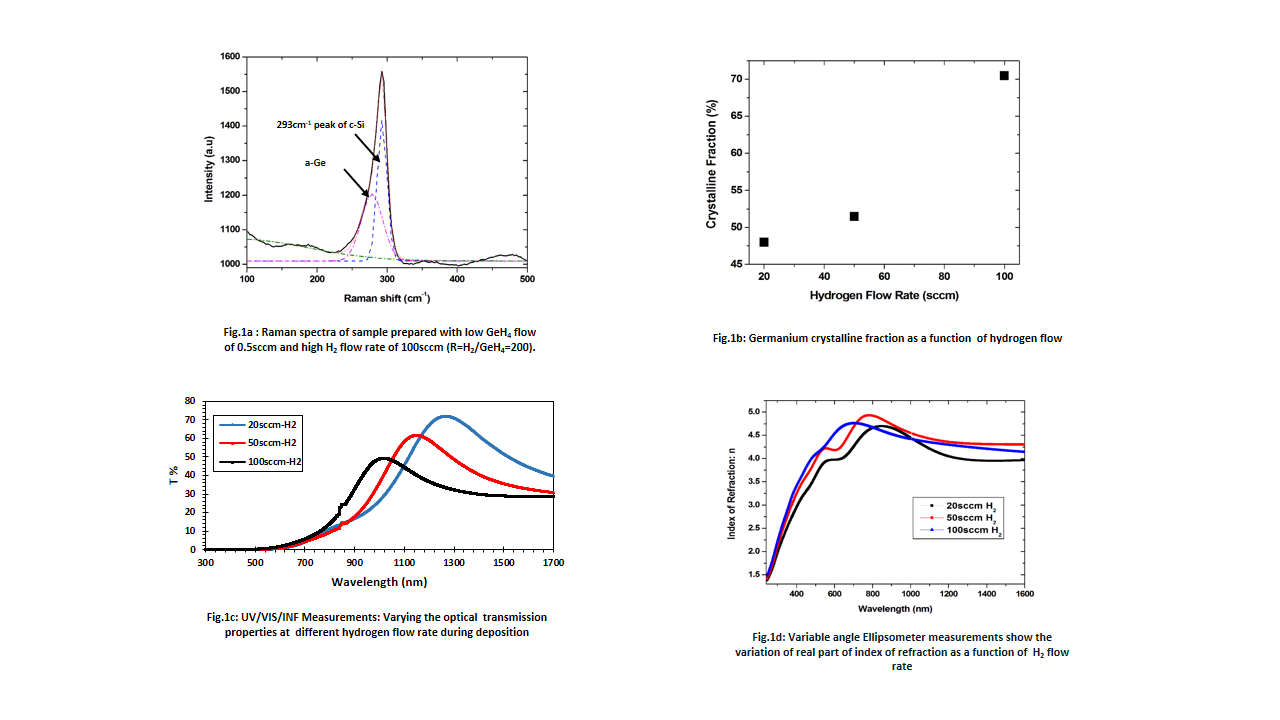