Early studies have shown the potential viability of hydrazine and its derivatives as a low temperature Nitrogen source in thermal ALD.1-3

Though theoretically appealing, an early problem encountered in this approach was the lack of vaporization sources for pure anhydrous H2NNH2gas. There are several challenges associated with the use of anhydrous hydrazine, as it is known to be highly flammable and toxic. In addition, current commercial sources lack the purity needed for semiconductor manufacturing.

Our approach toward increasing safety entails the use of a membrane delivery system where hydrazine is dissolved in an organic solvent (Figure 1). Hydrazine gas permeates the membrane and is delivered to the process chamber, while the solvent does not permeate and remains in the liquid state. Hydrazine vapor pressure is maintained at levels viable for current atomic layer deposition process requirements. The addition of a high boiling point solvent raises the solution flash point, reducing explosive risk.

Initial implementation of our novel hydrazine vaporizer focused on the passivation of SiGe(110) surfaces. Atomic layer deposition of a silicon rich SiNx control layer on Si0.7Ge0.3(001), Si0.5Ge0.5(001), and Si0.5Ge0.5(110) surfaces has been achieved by sequential pulsing of Si2Cl6 and N2H4 precursors at a substrate temperature of 285°C. XPS spectra show a higher binding energy shoulder peak on Si2p indicative of SiOxNyClz bonding while Ge2p and Ge3d peaks show only a small amount of higher binding energy components consistent with only interfacial bonds and indicating the growth of SiOxNy on the SiGe surface with negligible subsurface reactions. Scanning tunneling spectroscopy (STS) measurements confirm the SiNx interfacial control layer forms a passivating interfacial layer on both p-type Si.70Ge.30(001), Si.50Ge.50(110), and Si.50Ge.50(001) surfaces as the surface Fermi level was unpinned and the electronic structure was free of states in the band gap.

Significant amounts of oxygen are incorporated into the SiNx layer due to handling procedures as well as the inherent moisture levels in the starting liquid hydrazine material. However in this instance, SiOxNy layer serves to improve the SixGe1-xsurface by preventing formation of Ge-O bonds, therefore it is not a detriment as would be expected in other applications.

Measurement of water levels inherent to liquid hydrazine has been established to a LDL of 10 parts-per-million using Karl-Fischer and GC-MS methods. Gas phase moisture measurements have been carried out to an LDL of 800 parts-per-billion. Water content in gas phase hydrazine has now reached less than 1.0ppm, which is comparable to Semiconductor grade ammonia.

There is an emerging need for sub-400C metal nitride deposition. We have developed a novel hydrazine vaporization source and demonstrated that hydrazine is a viable precursor to enable low temperature ALD. Lack of liquid source purity initially posed a problem for films such as TiNx. Our new results indicate that we have overcome the purity issue by reaching hydrazine purity levels comparable to semiconductor grade ammonia. Ultra-high purity hydrazine is now being used for sub 400C deposition of high quality TiNx. XPS, AFM and sheet resistance of this material will be presented. 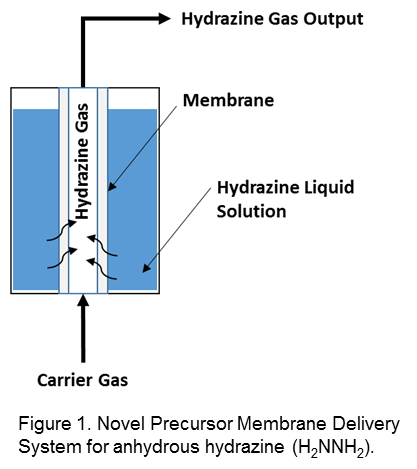